Odisha Channel Bureau
Bhubaneswar: The process has started for the establishment of Mahanadi riverine port in Kendrapara district of Odisha.

A memorandum of understanding (MoU) in this regard will be signed between the Paradip Port Trust and the Odisha government in the near future, according to officials. 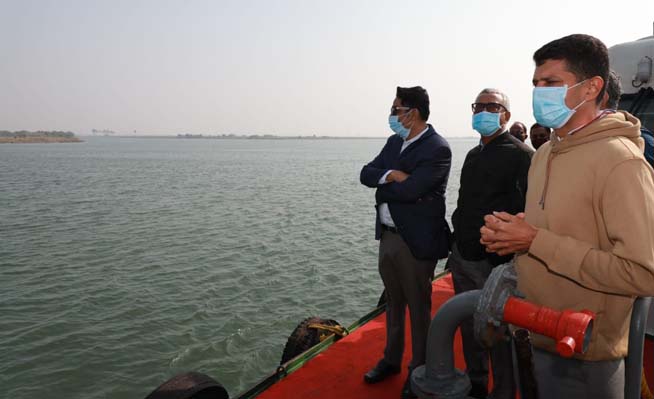 The port will come up at Akhadasali village under Mahakalapada Block in Kendrapara district, 13 km from the Mahanadi river mouth at Paradip.

This all-weather and multi-user port on river Mahanadi will be set up in PPP mode with a capacity of 54 MTPA and estimated cost of Rs. 4,062 crore of which 22 MTIPA capacity will be created in the first phase at a cost of Rs. 2,562 crore.

The officers travelled to the proposed site on a vessel of Paradip Port Trust together with PPT Chairman Rinkesh Roy and other officials.

MLA Mahakalapada Atanu Sabyasachi Nayak was present at the proposed port site and had discussion with officials about the project. Kendrapara Collector Samartha Verma also participated in the discussion.

PPT will develop supporting project infrastructure like rail and road connectivity and dredging requirements of the Port.

The State government has identified 300 hectares of land for the project. It will also provide necessary support to PPT in respect of any additional Land required for the Project.

Notably in 2018, the State government had decided to go ahead with Mahanadi riverine port and an RFQ was issued.

However, the project couldn’t progress due to lack of interest by potential bidders. PPT then evinced interest in the project and consequently, the MoU is proposed to be signed with the State government.

On commissioning, the port will provide direct and indirect employment opportunities to more than 4000 persons in the first phase and about another 1700 in the second phase.

The riverine port, along with the State aided Haridaspur Paradip Railway line, will go a long way in boosting the economy of the Kendrapara district.