Santosh Patnaik
Vijayawada: A global record was set by the YSR Congress Party by collecting 12,153 litres of blood from about 35,000 donors in less than eight hours to mark the birthday of Andhra Pradesh Chief Minister Y.S. Jagan Mohan Reddy on Monday.

Camps numbering 278 were conducted to collect blood at various places in Karnataka, Tamil Nadu and all 175 Assembly constituencies of Andhra Pradesh. 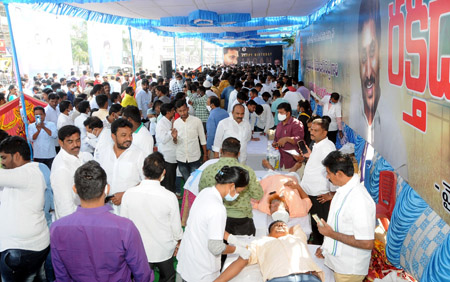 YSRCP set a world record with 34, 723 people donating blood in eight hours on the occasion of the birthday of the Chief Minister, an official of CM’ office said.

Representatives of the Wonder Book of Records International, who certified the record, had presented the citation and a medal to Government Advisor (Public Affairs) Sajjala Ramakrishna Reddy at the Party Central Office.

The Health Department officials are coordinating with other State functionaries to store blood units safely.

The representatives of Wonder Book of Records International said they had expected around 17,000 units of blood but it turned out to be more than their expectation. Government Advisor (Public Affairs) Sajjala Ramakrishna Reddy said YSRCP organised the mega blood donation camp to support health sector during the times of pandemic.