Odisha Channel Bureau
Bhubaneswar: The Tourism and Forest & Environment Departments of the Odisha government renewed their understanding for collaborative development of ecotourism when the 3rd National Chilika Bird Festival at Mangalajodi was inaugurated by Chief Minister Naveen Patnaik on Friday.

Patnaik, who eloquently described the destination as “a pilgrimage for over a million of winged visitors of varied species, applauded the efforts of Odisha Tourism and Ecotour Odisha for having organised the event which promises to add another feather in Odisha’s hat – a soaring birding hub. 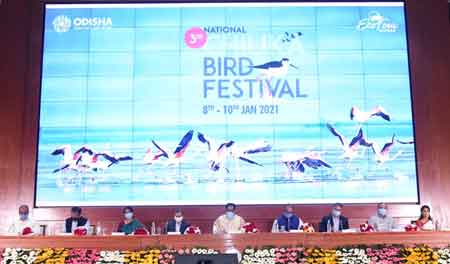 Offering a gist of the focused conservation campaign by the government, Chief Secretary S. K. Mohapatra, said, “Chilika’s Mangalajodi is a pioneering work in community-led conservation. It is an unparalleled birding destination. From protective actions like removing encroachments to the massive census exercise conducted a few days back, and promotional campaigns such as the Chilika Bird Festival – we jointly aspire to make Odisha – Chilika along with other niche destinations such as Satkosia, Bhitarkanika and Hirakud – the most sought after birding hub of Asia-Pacific region.

Expressing satisfaction that this year’s census has revealed a total count of 11.42 lakh birds across over 190 species in Chilika lake, Mohapatra informed of the plan to expand Ecotour Odisha’s successful community-managed hospitality to over 100 camps in the coming years.

OTDC Chairperson Shreemayee Mishra applauded Odisha Tourism for its stellar handling of the tourism ecosystem during the COVID-19 pandemic through protocol-compliant festivals and unmatched promotion and publicity.

“The transformation of Puri and Lingaraj Temple precincts under the leadership of our Chief Minister have set the direction for all of us – to unitedly make Odisha’s tourism and hospitality sector the most sought after,” she said.

State PCCF and Chief Wildlife Warden H. S. Upadhyay said that Chilika is also one of the safest havens for the endangered Irrawaddy Dolphins, which are flourishing here.

Upadhyay offered a scientific insight into the natural processes which preserve the salinity of the lagoon, a central factor for the flourishing biodiversity. “More than 600 community members, mainly tribals are engaged in this vast social enterprise”, he added to emphasise the community orientation of the conservation efforts, a factor which balances ecological and social sustainability.

Additional Chief Secretary, Forest & Environment, Mona Sharma offered a perspective on the strategic commonalities between eco-conservation and tourism and reminisced on the history of the Chilika Bird Festival. She beckoned the guest participants to play the vital role of ecotourism ambassadors of Odisha.

The Tourism and Forest & Environment Departments renewed their understanding which was first signed in March 2017. The objective is to tap and promote the state’s ecotourism potential – thus creating alternative employment opportunities for local community.

The key aspects of the understanding are:
• To jointly develop and market packages, experiences and itineraries
• To conduct collaborative research on ecotourism – including community tourism, outdoor recreation, wildlife tourism, etc.
• To work to develop zonal tourism masterplans for protected areas complying with the Eco Sensitive Zone Notifications & Guidelines of MoEFCC, Govt. of India
• To collaboratively develop necessary tourism infrastructure in the Tourism Zones of Protected Areas

“The large size of the lagoon offers a scope for several, the macrophyte density and the hydrology are key factors for Chilika’s bird diversity. This is complemented by our uncompromising monitoring of threats including physical sample collection and satellite studies”, he said.

Over the next two days, participants will undertake tours to Mangalajodi–Nalabana and Chandaka-Dampara Sanctuary and Satkosia Tiger Reserve (Badmul) as add-on itineraries.