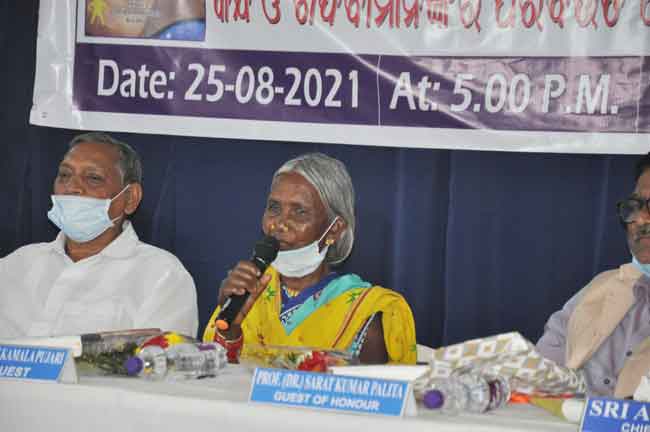 Odisha Channel Bureau
Koraput: ‘Tribes in Transition: The Changing Identity of the Kandhas and Gadabas of Odisha’, a report by the Indian National Trust for Art and Cultural Heritage (INTACH) was released at the Seminar Hall of the Tribal Museum at Koraput on August 25.

The Odisha Chapter of INTACH had decided to take up a project on documenting the intangible tribal heritage of the State in 2018. Approximately 22.85 percent of Odisha’s population, as per the 2011 Census, constituted Scheduled Tribes.

With 62 different indigenous tribes, having different lifestyles, customs and outlooks, two tribes, the Kandhas and Gadabas of Koraput were chosen for study.

The Koraput Chapter of INTACH undertook the report under the guidance of Sanjib Chandra Hota. Prafulla Chandra Mahapatra, Jagabandhu Samal and Anil Dhir made a number of field studies to study the changing world of the Gadabas and the Kandhas. The findings are an in-depth analysis of the fast changing and metamorphosing lifestyle of the two tribes.

According to Dhir, who compiled the study of the Dongria and the Kutia Kandhas, even after seven decades of independence, tribal communities have been striving for basic rights and entitlements.

“What are happening in the tribal hinterland are not cataclysmic events that hog mainstream media attention, but a slow insidious cancer that has been eating into the vitals for over a century and continues unabated. It is the story of displacement, dispossession and theft of what belongs to the tribal people,” he said, while adding that in Odisha, the phenomenon is more severe and acute; they have remained obscured from the main historical current of development.

“Industrialisation and mining operations have led to the uprooting of tribal villages, forcing them to live like industrial nomads. They have lost their traditional occupations, agricultural land and houses. Despite several development programmes, pro-poor laws and acts, the tribal communities are still among the poorest communities.”

Biswajit Mohanty stressed the need for abolishing all beneficiary programmes in the name of tribal development. He said that these programmes ruin the tribal lives and many tribes are in the verge of extinction. He showed his concern over the reducing of tribal population in Odisha. He stressed the need for more research on the livelihoods of tribals so that the tribals can be left in happiness without any disturbance.

Vice-Chancellor Palita said that tribal families are forced into distress migration and evicted from their homes of centuries and tribal habitats. Regions of plenty and abundance are slowly moving towards environmental disasters due to overexploitation and misuse.

Even though the tribals are slowly but surely becoming aware of and assimilating some of the modern values while continuing their traditions and conventions, the changes in culture are clearly visible in their language, dress, ornaments, food, health, education, religion and rituals. Policy planning, implementation and delivery efficacy should be properly audited, under academic guidance, he added.