Water on Wheels to spread message on water 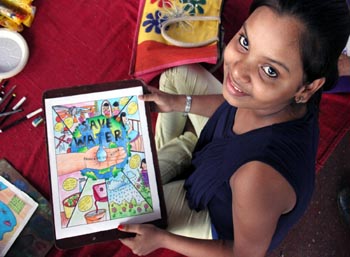 Odisha Channel Bureau Bhubaneswar, June 21: Bakul Foundation and East Coast Railways organised Water on Wheels: A Public Art event in the Capital city on June 21.Participating in the event, some of the best young contemporary artists of Odisha gave expression to their concerns about water issues at the Bhubaneswar Railway Station.The artists painted live on canvas in front of the Reservation and Booking Counters.The sight of so many professional artists painting in an unusual but crowded area, generated curiosity among the people assembled in that area as well as people going and leaving the station through that space.The artists and Bakul volunteers engaged the public on the issues of water that they are concerned about.Some artists also collaborated with the public in creating the art works.From East Coast Railways Sailendra Kumar Singh, DRM, H.L.Lumhang, SDCM, Jyoti Prakash Mishra, Chief PRO, and Sujit Mahapatra from Bakul Foundation were among the guests.The future plan is to give a new life to these art works by putting up reproductions of the art works in the railway coaches.These images will then sensitise thousands of people in the process. The participating professional artists include Pratap Kumar Jena, Smrutikanta Rout, Pinaki Mohanty, Marut Kumar Rout, Smruti Sai Mishra, Arjun Singh and Priyoum Talukdar.In addition, many child artistes from East Coast Railways participated in the event.Some rag-pickers who came first for food ended up drawing their perspective on water.In his collaborative art work, (in which the spectators also participated) Pinaki was playing on the difference between usage of water in the cities and in the villages.Whereas in the cities symbolised by taps, water is often wasted as the taps are left open, in the villages symbolized by the tube wells, water is taken only when needed.In his painting in which around 30 people participated, the public gave expression to the need for conserving water, planting trees, recycling and reusing water.In his simple but striking painting, Marut Kumar Rout had his canvas painted entirely black except for a triangle marked in red indicating danger and containing a water drop.Bakul Foundation, in association with partners, has been taking the lead in Odisha in the last few years in creating awareness on issues relating to water through the medium of art.In 2013, Bakul organised the painting of the Wall of Water in Bhubaneswar in which a 500 ft long public wall was painted by hundreds of people on the theme of water.