Furore over killing of Dalit girl by ex-boyfriend

Santosh Patnaik
Vijayawada: Following protests over brutal killing of a Dalit girl in Anantapur district by her estranged boyfriend, the Andhra Pradesh Government arrested two accused persons and announced a rehabilitation package to the bereaved family.

The government promised to give ex-gratia of Rs.8.25 lakh, Rs.10 lakh from CM Relief Fund, agriculture land of 10 acres, a government job and a house as per SC and ST (Prevention of Atrocities) Act. 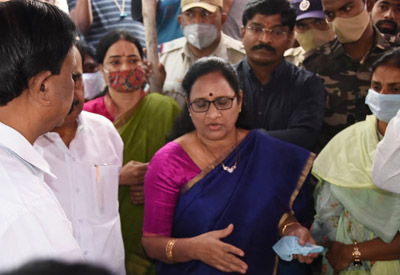 Dalit and other outfits and main Opposition Telugu Desam Party accused police of negligence in taking action despite lodging of a complaint by the victim’s mother before the killing.

After their four-year old relationship broke off, G. Rajesh called M. Snehalata on his bike to sort out differences. On the way he throttled her to death and burnt her body in an agricultural field to destroy the evidence. Anantapur is bordering Karnataka’s Bellary district.

SP B. Satya Yesu Bose said they have arrested Rajesh and his accomplice S. Kartik. The murder of 19-year girl, an outsourced employee in a public sector bank took place Badanapalli village in Dharmavaram tehsil.

AP Women’s Commission Chairperson Vasireddy Padma visited Anantapur on Thursday to console the bereaved family, expressed anguish over police inaction and called for change in mindset of society towards women.

Meanwhile, TDP president N. Chandrababu Naidu blamed the government for not taking timely action in preventing the murder as mother of the victims lodged a complaint at Disha (set up exclusively for dealing with crime against women) Police Station and dialing 100 seeking help and demanded an enquiry by CBI.