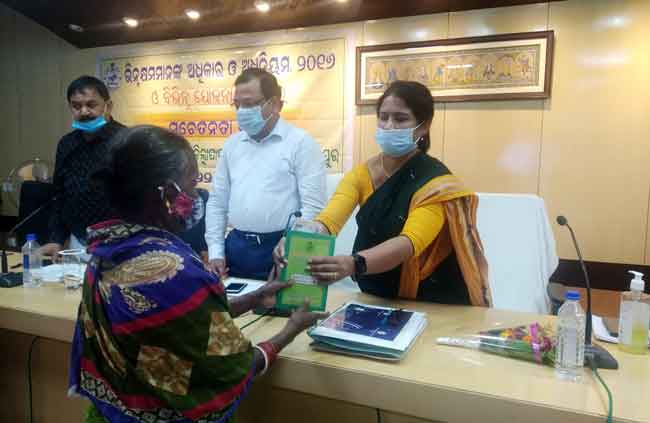 Odisha Channel Bureau
Jagatsinghpur: Odisha State Commissioner for Persons with Disabilities (SCPD) Sulochana Das on September 22 asked the officials of Jagatsinghpur district administration to ensure that the benefits of welfare schemes meant for persons with disabilities are delivered at the grassroots.

Speaking at an Awareness and Sensitisation Camp on the Rights of Persons with Disabilities Act, 2016 and different government welfare schemes for persons with disabilities (PwDs), the SCPD said: “Whether it is vaccination for COVID-19, benefits of welfare schemes or aids and appliances, it must reach the PwDs at the grassroots without any obstacles.”

Several district administration officials including Jagatsinghpur Collector Sangram Keshari Jena and Additional District Magistrate Sachidananda Mohanty were present in the camp. All the block development officers, tehsildars and block social security officers, voluntary groups and several PwDs and their caretakers also attended the camp. The camp was organised by the Office of the Commissioner for PwDs with the help of the district administration.

In the camp, SCPD Das reviewed the process of vaccination, identification of PwDs, issuance of certificates to the PwDs, their accessibility to public buildings and spaces, granting of pension and many other issues relating to them. She praised the administration for constructing a disabled-friendly passage and lift in the collector’s office.

Copies of the Rights of Persons with Disabilities Act, 2016 in English and Odia were distributed to the people present in the meeting. SCPD Das said that everyone including the officials, voluntary workers and PwDs and their caretakers must read the Act thoroughly so that the officials implemented the schemes more effectively and the PwDs are aware about their rights and entitlements.

At the end of the camp, some PwDs received 10 UDIB cards, four smart white canes and three DAISY (Digital Accessible Information System) players (to persons with impaired vision) and one TLM kit to an intellectually disabled person from the SCPD.