Odisha Channel Bureau
New Delhi: It is January, and the eastern states of India – Bihar, West Bengal and Odisha – are now feeling the sting of increased winter air pollution, says a new analysis of regional pollution trends done by Centre for Science and Environment (CSE). 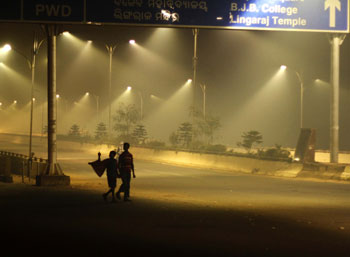 The winter smog that engulfs North India during early November begins to extend eastwards during late December and early January. Bihar, West Bengal and Odisha are affected mostly during this time when winter inversion and the cool and calm conditions trap the local pollution that is already high.

“This analysis of real time air quality data for the period 2019-2021 shows that the downward dip in pollution that was induced by the hard lockdown phases of the pandemic in 2020 is threatening to bounce back with the levels in 2021 already rising. But in many cases, the levels are still lower than 2019. This underscores the urgency of scaling up action across all sectors to prevent further worsening and to arrest the trend in this region,” says Anumita Roychowdhury, executive director, research and advocacy at CSE.

“Even though real time air quality monitoring has begun to expand in these states to provide more up to date and real time information on air quality, there are serious concerns around missing data and gaps that makes proper risk assessment difficult. In some stations of Bihar and Odisha, data availability is so low that the trend cannot be assessed. Quality control of data is necessary,” says Avikal Somvanshi, programme manager at Urban Data Analytics Lab, CSE.

This new analysis of real time pollution data by CSE is a part of the air quality tracker initiative of the Urban Data Analytics Lab of CSE. The objective of this new analysis is to understand the trend and magnitude of pollution in different regions that have real time air quality monitoring systems. This is an assessment of annual and seasonal trends in PM2.5 concentration for the period January 1, 2019 to January 4, 2022. This analysis is based on the real time data available from the current working air quality monitoring stations. A huge volume of data points have been cleaned and data gaps have been addressed based on the USEPA (United States Environment Protection Agency) method for this analysis.

There are two stations in Bhagalpur and one station each in Bettiah, Bihar Sharif, Darbhanga, Motihari, Araria, Arrah, Buxar, Chhapra, Katihar, Kishanganj, Manguraha, Munger, Purnia, Rajgir, Saharsa, Sasaram, and Siwan. But due to excessive amount of missing data from these stations meaningful analysis has not been possible. Hajipur in Bihar has data availability for over two years.

In West Bengal, real time monitors in Durgapur and Haldia became operational only near the end of 2020 which limits the possibility of doing long term trend analysis for these cities. Odisha has very limited real time monitoring. Therefore, data is indicative of the current status of air quality and seasonal variation in particulate pollution in medium and smaller cities.

Most cities show a rising trend in annual PM2.5 levels after an initial drop during 2020 with more pandemic related lockdown phases: Nearly all cities in the region show a drop in annual average PM2.5 level in 2020 that was also the year with maximum lockdown phases. But there is a rebound and a rising trend once again in 2021 though in several cases the levels are lower than the 2019 level. Durgapur, a big industrial hub of West Bengal that is also designated as a critically polluted area by CPCB, has the most polluted air in the region with 2021 average at 80 ug/m3. This is followed by Muzaffarpur and Patna with 2021 annual average of PM2.5 at 78 ug/m3 and 73 ug/m3 respectively.

If the real time data is taken as an indicator, in West Bengal, Durgapur needs to reduce annual average PM2.5 by 50 per cent to meet the annual PM2.5 standard, Howrah 34 per cent, Asansol 32 per cent, Siliguri 32 per cent, Kolkata 28 per cent. Haldia met the standard in 2021. In Bihar, Muzaffarpur needs reduction in annual average PM2.5 level by close to 49 per cent to meet the standard, Patna 45 per cent, Hajipur 33 per cent, Gaya 18 per cent. Odisha is the only state where Bajrajnagar and Talcher have met the annual standard with average.

The cities in eastern region did not experience ‘severe’ days during 2021 but the share of ‘poor’ and ‘very poor’ days are high: During 2021 severely polluted days have not been noted in any city. Share of very poor days has been highest in Muzaffarpur at 93 in Bihar followed by Durgapur at 71 in West Bengal, Patna with 67 days in Bihar and Howrah with 58 days in West Bengal. Days with poor air quality is highest in Durgapur at 71 followed by 67 in Patna, 53 in Kolkata and 51 in Howrah. These bad air quality days are concentrated during winter months. The overall number of ‘good’ and ‘satisfactory’ air quality days have also increased during the pandemic. Bad air days begin to build up around the same time in the cities of eastern states that end of December During but it seems it persists longer in some cities like Siliguri, Durgapur, and Patna. In the next rung are Muzaffarpur and Howrah.

High weekly pollution episode during winter can be more than double the annual concentration in several cities: During the worst weekly pollution episode in winter the PM2.5 concentration can increase significantly higher than the annual PM2.5 average – about two times high in several cities. During the high pollution episodes weekly PM2.5 levels can go as high as 213 ug/m3 as recorded in Muzaffarpur in December 2021. This winter so far the highest weekly level has recorded 171 ug/m3 in Durgapur, 166 ug/m3 in Patna, 148 ug/m3 in Howrah, 137 ug/m3 Hajipur, 118 ug/m3 in Kolkata, and 114 ug/m3 in Asansol. The levels are marginally lower this winter compared to last winter except in Hajipur which shows 1.8 times increase comparing to previous winters.

Changing ratio of PM2.5:PM10 during different seasons of 2021: The PM2.5/PM10 ratio is a useful indicator to understand the impact of coarse dust vs tinier dust from combustion sources on air quality. Higher share of smaller particles in total particle concentration makes the air more toxic. The indicative ratio for all cities show there is a seasonal variation. The share of smaller PM2.5 is higher than the coarser PM10 in monsoon and winter. The long-term variation of the PM2.5/PM10 ratio was analyzed from weekly data average for three different seasons: Summer (March – May), monsoon (June – October), and winter (November – January).

Winter pollution can be a toxic cocktail of particulate and gases: There is a significant increase in amount of nitrogen dioxide (NO2) in air of all cities of eastern states during December compared to the previous months of November, October and September. Brajrajnagar registered 3.6 times jump in monthly NO2 level, Kolkata registered a 2.8 times increase while Patna, Talcher, and Asansol registered a 2.5 times increase. In absolute concentration term, Patna registered the highest monthly average of 51 µg/m3 for December. It is followed by Kolkata (50 µg/m3) and Talcher (44 µg/m3). Muzaffarpur, Howrah and Hazipur showed increase in amount of NO2 in month of November as compared to December.

NO2 levels correlate well with traffic peaks in cities: All cities show peaking of hourly NO2 concentration between 6pm and 8pm which coincides with evening rush hour in the cities. Hourly NO2 in Siliguri increases four-folds between noon and 7pm. The NO2 cycle is equally sharp in Muzaffarpur and Asansol with 3.5-3 times increase noted at evening compared to afternoon. All cities have a morning NO2 peak around 7-8am but this is relatively lower` than the evening peak. In Patna and Kolkata high NO2 levels persist up till midnight indicating presence of pollution from night-time truck movement in the city.

Conclusion and the way ahead
The eastern region that spans across middle and low Indo Gangetic Plains experiences winter smog towards the end of December and early January. Pollution trapping can be high during adverse winter conditions as the overall pollution level in cities are high. The region is already experiencing rebound of pollution after the temporary dip in 2020 due to the pandemic linked hard lockdown phases.

The city and state action plans in the concerned states require stronger multi-sector interventions to reduce pollution in a time bound manner and to meet the national ambient air quality standards. Scale up access to clean fuel and technology in industry and power plants, transform public transport, walking and cycling at a scale, address old vehicles and speed up electrification of new fleet, amend municipal bylaws and scale up infrastructure for management and recycling of all waste streams, eliminate solid fuel for cooking, control dust from construction sector and adopt greening and afforestation strategy for dousing dust. This agenda is non-negotiable to meet the clean air target.