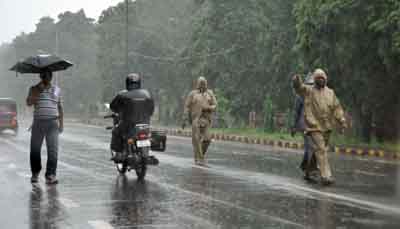 Odisha Channel Bureau Bhubaneswar, July 20: Incessant rains for the past few days have posed flood threat in many areas of Odisha.As a result, the State Government has issued flood alert for all 30 districts as the Bhubaneswar Meteorological Centre had predicted heavy rainfall over the next four days.While rain/thundershower was likely to occur at most places over Odisha during the next 24 hours, extremely heavy rainfall was likely to occur at one or two places over interior Odisha.On the other hand, fishermen have been advised not to venture into the sea as strong and gusty surface wind speed reaching 45-55 kmph to 65 kmph from south westerly direction may prevail.Meanwhile, the water level in Mahanadi, Kushabhadra, Devi and Baitarai was rising.On the other hand normal life continued to remain affected in most parts of the State as there was no respite of rain.Those living in low-lying areas of Bhubaneswar and Cuttack, particularly those living in the slum clusters, were having a difficult time due to water logging.