Odisha Channel Bureau
Bhubaneswar: A total of 78.6% of the 56.53 lakh voters exercised their franchise in the third phase of the three-tier panchayat elections in Odisha on Sunday, an official of the State Election Commission said on Monday.

Sporadic violence was reported in the third phase of the rural polls on Sunday.

The voter turnout in the first and second phases held on February 16 and February 18 was 77.2% and 78.3% respectively. 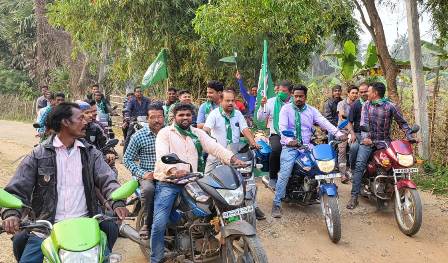 The State Election Commission said that preparations are in the final stages for conducting the fourth phase of the rural polls on February 22. More than 51.31 lakh voters are eligible to exercise their franchise.

The polling in Dhenkanal and Angul districts will be completed with the fourth phase of the polls. Special arrangements have been made in Maoist-hit areas of Koraput district.

Many incidents of violence and attempts of rigging marked the third phase of elections on Sunday.

Among other incidents four journalists covering the attempts to capture a booth in Bachhala gram panchayat of Binjharpur block of Jajpur district were attacked by the locals.