Odisha Channel Bureau
Bhubaneswar: Odisha recorded an average voter turnout of 79% in the fourth phase of the five-phase panchayat election on Tuesday, the State Election Commission said on Wednesday. 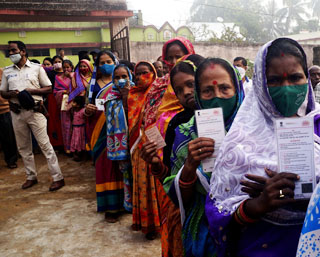 The highest voter turnout of 86.57% was recorded in Subarnapur district while Ganjam logged the lowest of 65.21% in the fourth phase polls which was held in 64 blocks spread across 27 districts of the state.

According to the Election Commission, the polling percentage in the four phases of polling conducted so far remained above 70%.

The fifth and final phase of the three-tier panchayat elections is scheduled to be held on February 24. Adequate security arrangements have been made to make the polling process free and fair.

The counting of votes polled for the post of Zilla Parishad Members, Panchayat Samiti Members, Sarpanchs and Ward Members will be held at all block headquarters over three days starting from 8 am on February 26.