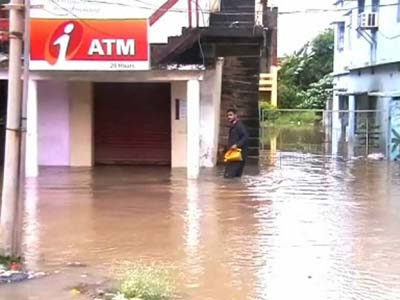 Rajashree DasJajpur, July 21: With incessant rains for the past three days showing no sign of abetment, the water levels in Baitarani and its branch river Budha continued to rise triggering flood in Jajpur district of Odisha on Monday.Baitarani is flowing above the danger mark near Akhuapada of the district and the river is rising alarmingly due to heavy rains in the upper catchment area.On Monday evening, the water level in Baitarani at Akhuapada was flowing at 18.70 metre against its danger level 17.83 metre, the officials said.The river is still flowing alarmingly, they added.Thousands of people of Dasarathapur, Korei and Jajpur blocks in Jajpur district have fled their homes to safer places as river Baitarani swelled alarmingly since Sunday and flowed above the danger mark, inundating many low-lying areas in of these blocks.Baitarani’s branch Budha river is also flowing above the danger mark resulting into floods in some low lying inhabited villages in the district.According to district administration officials, with both Baitarani and its branch flowing above danger mark flood water has forced at least 10,000 people in three blocks of the district to move to safer areas.The district administration has sounded high alert in the region.“The water level in Baitarani is flowing above the danger mark and we expect that there will be high flood in the river tonight as it is rising alarmingly,” said Jajpur Collector Anil Kumar Samal.He said the district administration has asked the people residing in the low lying areas to come to safer places in wake of the high flood in the river and take shelter in nearby schools and cyclone shelters.The district administration had an emergency meeting with all concerned officials in the afternoon and alerted them accordingly.One team each of Odisha Disaster Rapid Action Force has been dispatched to Dasarathapur and Korei.Further, two more teams of National Disaster Rapid Action Force are expected to arrive soon, he said.“We are keeping a close watch on the flood and asked all the concerned block development officers as well as the Tehsildars to be vigilant,” said Samal.A round the clock control room has been opened, he said adding all leaves of the officials have been canceled due to the flood situation.“The district administration is well prepared to meet any kind of eventuality arising out of situation,” said Samal.