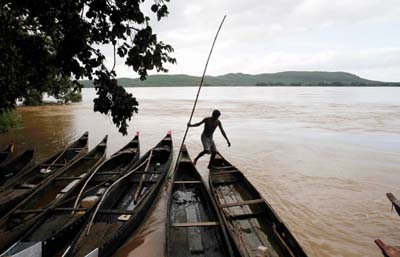 Odisha Channel Bureau Bhubaneswar, Aug 5: The flood situation in Odisha worsened on Tuesday as lakhs people remained marooned in several districts across the State even as the threat of a massive flood loomed large in the Mahanadi delta area on Wednesday.Many rivers were flowing over the danger level at many places till Tuesday night as the State Government asked the district administrations concerned to step up rescue operations on a war footing.As many as 23 people were killed in rain and flood so far in the State.The death toll was likely to rise as unconfirmed reports were pouring in from the flood-hit zones.The rivers that were flowing above the danger level late on Tuesday night include Mahanadi, Devi, Baitarani, Brahmani, Budhabalanga, Subarnarekha, Kushabhadra, Vansadhara and Rushikulya.Even as lakhs of people struggled to cope with floods in the districts of Balasore, Keonjhar, Bhadrak and Jajpur on Tuesday, the situation was likely to turn worse in the Mahanadi delta that includes the districts of Cuttack, Nayagarh, Jagatsinghpur, Khurda, Puri, Jagatsinghpur and Kendrapara on Wednesday as 12 lakh cusecs of water was likely to flow at Mundali near Cuttack by Wednesday afternoon.More than 10 lakh cusecs of water was being released at Khairmal on Tuesday night.Chief Minister Naveen Patnaik reviewed the flood situation in the State at a high level meeting at the State Secretariat during the day, and asked the Collectors of different flood-affected districts to take all the precautions to cope with the situation.The water level at all major reservoirs across Odisha was on the rise by late Tuesday night.They include Hirakurd, Rengali, Balimela, Machhkund, Upper Kolab, Indravati and Salandi.