Bari remains cut off from the rest of the world 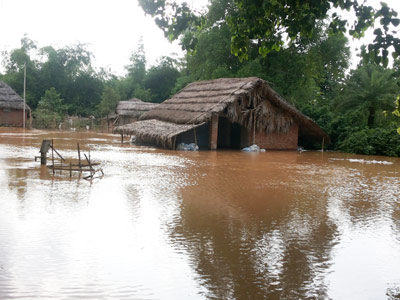 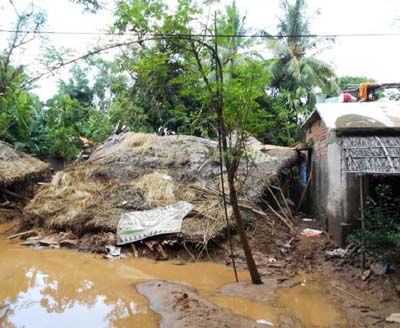 The agony of the flood affected people in all the flooded areas of Bari knows no bounds when particularly no government relief or rescue reached them even expiry of the 36 hours after flood.There were four breaches in the Brahmani river since Wednesday morning by which river water gushed into at least forty villages and inundated vast areas.Later, another river Kharasrota breached at two locations.All the breaches caused marooning over a lakh of people of the block.People saved themselves by rushing to on the roof top of their respective houses or to the high land.But till Thursday evening irrespective of children to older people are starving and even lack of drinking water.Many people are also suffering from fever and diarrhea.‘As soon we became marooned by the Brahmani water I rushed to on the roof top my house along with my family.Unfortunately no government or rescue personal has reached to us till the expiry of 36 hours,” said Babula Malick of Chandanpur.The flood victims who have taken shelter on the roof top or high land are without food and water since Wednesday morning.“We the entire family is without food since the water gushed into our house.So far neither government officials nor government help has come to us,” said Rabindra Behera of Matiapada village in Bari block.We need immediate food and drinking water, he said.Though the district administration on Thursday claimed to have provided four power boats and six country boats to the flood areas of Bari, practically no boat or power boat were found in the region.While four breaches occurred in Brahmani right embankment near Matapda, Chandanpur, Rampur and Poisahi under Bari block in the district on Wednesday morning, two breaches occurred on the banks of Kharasrota river at Bhanra and Raipada.Earlier, Baitarani embankment breached near Patapur and under Dasarathapur block in the district.In total, there are eight breaches occurred in Baitarani, Brahmani and Kharasrota embankment by the flood in the district, officials said.