Report on status of elderly in Odisha released

Odisha Channel Bureau Bhubaneswar, Sep 2: For the first time, a report on the `Status of Elderly in Odisha’ was released by the United Nations Population Fund (UNFPA) here on Tuesday.The report reveals some startling facts about senior citizens in the State.This is for the first time in India a comprehensive report was brought out covering seven states having a higher proportion of elderly population in the country.Apart from Odisha, the other states covered include Kerala, Tamil Nadu, Maharashtra, Punjab, Himachal Pradesh and West Bengal. 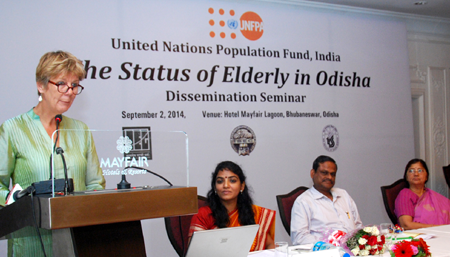 The report says that nearly half of the elderly men continue to work in their old age due economic compulsion and only 20 per cent are found to be working out of choice.On the other side, an encouraging observation from the study is that the coverage of national pension schemes is one of the highest among the study states.Around 60 per cent of the elderly women from BPL households availed widow pension while 44 per cent of the elderly men from BPL households are receiving old age pension benefits.With regard to their health status, around half of the elderly in Odisha are suffering from chronic morbidity, highest being arthritis followed by hypertension.Diabetes and heart ailments are more common among the urban elderly.The report also observed that majority of the elderly availed public health facilities for treatment.The worrying fact is that in spite of using public health care system, the cost of health care has been significant.Although three fourth of the elderly reside with their children, the psychological distress among them are found to be relatively high with around two third suffering from mental stress.The study reported that 10 per cent of the elderly experienced abuse which is higher among elderly women.Sadly most of the abuse is inflicted by family members particularly the sons.The study in Odisha is part of a larger initiative for “Building Knowledge Base on Population Ageing in India (BKPAI)” undertaken by UNFPA India, in collaboration with three well known institutions in the country – Institute for Social and Economic Change (ISEC), Bangalore; the Institute of Economic Growth (IEG), Delhi; and the Tata Institute of Social Sciences (TISS), Mumbai.The report was released by Usha Devi, Women & Child Development Minister of Odisha in the presence of Frederika Meijer, UNFPA Representative for India and Bhutan and Nalinikanta Das, Special Secretary, Department of Health and Family Welfare, Government of Odisha, Sanjay Kumar, National Programme Officer, UNFPA, India and Deepa Prasad, State Programme Coordinator, UNFPA, Odisha.Frederika Meijer in her address mentioned that ageing is a silent revolution and many countries including India are not yet prepared for the demographic shift.Even with increase in elderly population global evidences show that the elderly are not a burden but with right policies they can make a significant contribution to the society.Odisha has 3.98 million elderly persons aged 60 years and above, constituting 9.5 per cent of the total population against a national average of 8.5 per cent.Around 86 per cent of the elderly live in rural areas.The elderly population will increase to 6.27 million by 2016 and will comprise of 13.8 per cent of the total population.The report also suggests that policy and programme interventions should consider various dimensions of vulnerability which are being faced by the elderly in the state, such as poverty, economic compulsion to work, widowhood, high level of dependency, age related morbidity and high health care costs.Income insecurity and a high degree of dependency result in significant vulnerability among the elderly in general and elderly women in particular given the high proportion of widows in the state.Measures to improve the coverage of social security schemes to all elderly from BPL households and to reduce the financial burden of health care will make a difference in the lives of the elderly.