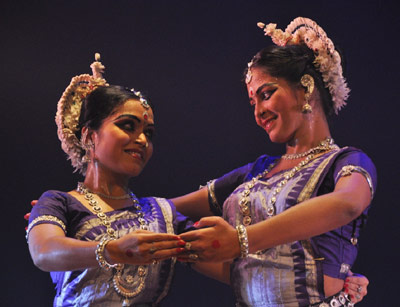 Sincerity, self confidence and perseverance have sometimes conquered poverty and all hurdles for which Guru Kelucharan Mohapatra had set an example to be emulated by others.The award was instituted in the year 1995 with a view to generating a feeling of cultural amity amongst the performing arts fraternity and acknowledging the excellence and contribution of great artists in the field of dance, music, theatre and cinema.Guru Ratikanta Mohapatra the leading torch-bearer of his father and Guru Kelucharan Mohapatra’s legacy is committed to reach out the nook and corner of the Globe with all its pristine glory and purity.Srjan (Guru Kelucharan Mohapatra Odissi Nrutyabasa), founded in 1993 by Guru Kelucharan Mohapatra, has pioneered the cause of recognising the talents and achievements of individual artists in different art forms.The artistes of Srjan presented Synthesis, Shraddha is affection personified.She is the goddess of confidence, faith, care and conviction.Any endeavour that begins with an aim to achieve a goal needs all qualities.To succeed in accomplishing their objectives, the Rigvedic sees invoke goddess Shraddha.Their concluding item was Kubjaa a neoclassical innovation in dance.The choreography of this mythological presentation was by Guru Ratikanta Mohapatra, the music was composed by Lakshmikant Palit and script prepared by Nityananda Misra.