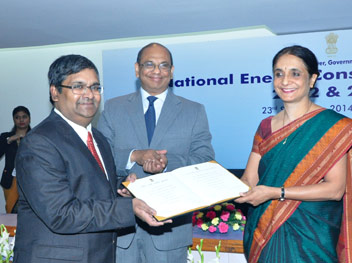 Odisha Channel Bureau Bhubaneswar, Sep 24: The mines and refinery complex of National Aluminium Company Limited (NALCO) has been conferred with the National Energy Conservation Award in appreciation of its laudable efforts in the arena of energy conservation, specific to the aluminium sector for the year 2012.It may be mentioned that the Mines & Refinery Complex of NALCO, situated at Damanjodi, Koraput, Odisha, has emerged as the only unit to achieve this award in the aluminium sector in the year 2012.On behalf of the company, V.Balasubramanyam, Executive Director (Production) received the award from Neerja Mathur, Chairperson, Central Electricity Authority (CEA), during the National Energy Conservation Award Function held on September 23 at Central Electricity Authority Auditorium, Ministry of Power, New Delhi.Mines and refinery complex of NALCO has achieved a significant reduction of 9.779% in specific electrical energy consumption and 2.344% reduction in specific thermal energy consumption in the year 2011-12, as compared to the year 2010-11.