This is one of the major promises made during the general elections. Though the implementation of the scheme scheduled for Ugadi, Telugu New Year in March was put off due to court cases, after vacating of stay Reddy performed groundbreaking ceremony on Friday Uganda coinciding with Vaikunta Ekadasi and Christian near Kakinada in East Godavari district. 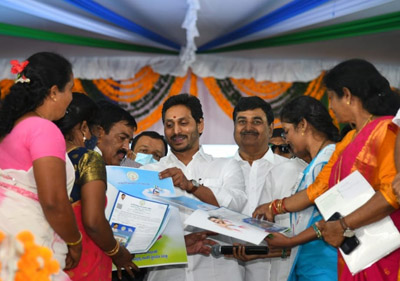 The flagship programme of Navaratnalu named ‘Pedalandariki Illu’ was launched at Komaragiri layout of U Kothapalli tehsil.

Speaking at the launch event, the Chief Minister said that he had witnessed the plight of the homeless poor during his 3,648 km padayatra and that had driven him to take up this massive project, despite encountering many hurdles. He said that about 30.75 lakh beneficiaries had been identified across the State, of which 28.30 lakh houses would be given under 17,000 YSR Jagananna layouts. Another 2.62 lakh are under TIDCO (sanctioned but not completed in erstwhile government) scheme.

“We are not constructing just houses for poor, we are constructing towns,” said the Chief Minister adding that the government would take up the construction of 28.30 lakh houses at a total cost of Rs. 50,940 crore, while in the first phase 15.60 lakh houses would be built from Friday at a cost of Rs. 28,000 crore and the remaining 12.70 lakh house from next year.

All the beneficiaries will be given 1.5 cents in rural areas and one cent in urban areas.

With regard to this project, the Chief Minister said that the government had acquired 68,361 acres of land worth Rs. 23,535 crore, where each beneficiary will receive a land costing around Rs 4 lakh. Stating that three options were given to the beneficiaries for the construction of their houses, he said they can choose either one.

In the first option, the entire building material and labour charges will be given by the government, where the beneficiary can construct the house as per their choice. In the second option, the beneficiary has to build on their own and has to procure building material and the money will be released in phases. The third option is that the government shall take up the entire responsibility of building the house just like the model house where each house will consist of one bedroom, living room, kitchen, toilet and verandah, with a total plinth area of 340 sq. ft. and will be provided with basic facilities like lights, fans, overhead tank and water connection.

Referring to the TIDCO housing, Chief Minister said that for the first time in the country, a house site patta is being given for just one rupee. He said that the previous TDP government had left a debt of Rs. 3,000 crore for constructing 2.62 lakh houses.

He said that the selection of beneficiaries was done in a most transparent manner irrespective of caste, creed and political affiliation. This is a continuous process and still eligible persons can apply and allotment will be done in 90 days.

For amenities for each house with a bed room, living room, kitchen and verandah with a total sq. ft. of 340 sq. ft. Rs.6,800 crore will be spent.

Urban Development Minister Botsa Satyanarayana said such a housing for poor had been taken up for the first time in India.