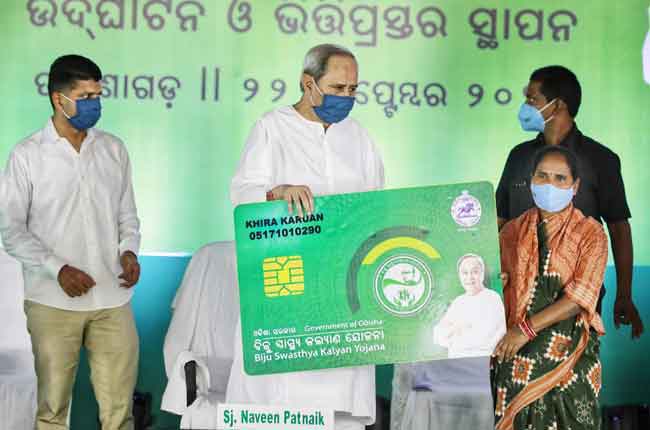 The Chief Minister visited Titilagarh, Patnagarh and Balangir towns in the district and distributed smart cards. In Titilagarh, he inaugurated the programme by handing over smart health card to Sarojini Bahidar as the first beneficiary of the district. Four and a half lakh families in the district will get the facility.

In his inaugural address, Patnaik opined that the provision of smart health cards could change the healthcare system of the general public. “It’s a milestone in the country’s health care system,” he said.

The Chief Minister said that the Biju Swasthya Kalyan Yojana is being implemented in a new way and all the beneficiaries of the national and State food security scheme are being given smart cards.

The Chief Minister said that if the card was kept, no documents were required for treatment. With just this card, people can get quality treatment at no cost in 200 major hospitals in the country – up to Rs. 5 lakh a year for families and up to Rs. 10 lakh for women.

“No one should be deprived of good medical care for money,” he said, while adding that every life is precious to him and the State could only prosper if everyone was healthy.

The Chief Minister first visited Titilagarh and launched a number of new projects there. He inaugurated the completed water pipeline project in Titilagarh-Saintala block and laid the foundation stone of the piped water project for all houses in Titilagarh town.

In Patnagarh, the Chief Minister laid the foundation stone for the development of the famous Harishankar temple among many projects. The shrine is an important pilgrimage site in the State, he observed.

The Chief Minister said the shrine was being developed under the 5T initiative to give a beautiful, spiritual experience to the devotees who come here. This will increase the spread of religious and cultural traditions in the region, he said.

Finally, the Chief Minister visited the district headquarters town of Balangir and inaugurated several projects there. “Education and health are the cornerstones of all our development,” he said. That is why the state government attaches great importance to the development of these two sectors under the 5T agenda.

The State government is paying for improving the health infrastructure in the State and bearing the full medical expenses in all government hospitals, said the Chief Minister while seeking the cooperation of the people in the development of the State.