By Dr.H.R.KeshavamurthySwami Vivekananda, one of the greatest sons of India is always remembered all over the world for his address at the World’s Parliament of Religions held at Chicago in 1893, which made the western intelligentsia to turnaround to recognise the great culture and tradition India had since time immemorial.His speeches at the World’s Parliament of Religions made him famous as an ‘orator by divine right’ and as a ‘Messenger of Indian wisdom to the Western world’.After the Parliament, he spent nearly three and a half years, spreading Vedanta philosophy as taught and practised by Sri Ramakrishna Paramhans, mostly in the eastern parts of USA and London. 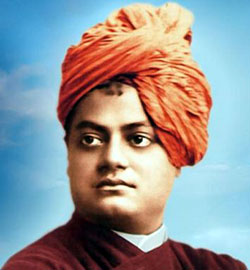 Swami Vivekananda, known in his pre-monastic life as Narendranath Datta, was born in Kolkata on 12 January 1863.Born with a yogic temperament, he used to practise meditation even from his boyhood, and was associated with Brahmo Movement for some time.By the time he graduated from Calcutta University, he had acquired vast knowledge of different subjects, especially Western philosophy and history.One day in November 1881, Narendra went to meet Sri Ramakrishna who was staying at the Kali Temple in Dakshineshwar.Apart from removing doubts from the mind of Narendra about the existence of God, Sri Ramakrishna won him over through his pure, unselfish love.Thus began a guru-disciple relationship which is quite unique in the history of spiritual masters.Sri Ramakrishna instilled in him the spirit of renunciation and brotherly love for others.In August 1886, Sri Ramakrishna gave up his mortal body.After the Master’s passing away, his disciples formed a new monastic brotherhood and took the formal vows of sannyasa, thereby assuming new names.Narendra thus became Swami Vivekananda.In the middle of 1890, after receiving the blessings of Sri Sarada Devi, the divine consort of Sri Ramakrishna, known to the world as Holy Mother, Swamiji embarked on a long journey of exploration and discovery of India.During his travels all over India, Swami Vivekananda was deeply moved to see the appalling poverty and backwardness of the masses.He immediately understood that the real cause of India’s downfall was the neglect of the masses that had lost faith in their capacity to improve their lot as a result of centuries of oppression.First of all, it was necessary to infuse into their minds, confidence and faith in themselves.For this they needed an inspiring message that can energise them into lead a life full of activity for their own betterment.Their faith in religion but with no understanding of the Vedanta philosophy and its practical application showed Swamiji the light amidst darkness.The masses needed two kinds of knowledge: secular knowledge to improve their economic condition and spiritual knowledge to infuse in them faith in themselves and strengthen their moral sense.Education was the answer that Swamiji found.To carry out his plans for the spread of education and for the uplift of the poor masses, and also of women, an efficient organization of dedicated people was needed.It was for this purpose Swamiji founded the Ramakrishna Mission a few years later.Thus began the social engineering with a touch of spiritualism.In response to the enthusiastic welcome that he received everywhere, he delivered a series of lectures in different parts of India, which created a great stir all over the country.Through these inspiring and profoundly significant lectures, Swamiji attempted to rouse the religious consciousness of the people and create in them pride in their cultural heritage; to bring about unification of Hinduism by pointing out the common bases of its sects; to focus the attention of educated people on the plight of the downtrodden masses, and to expound his plan for their uplift by the application of the principles of Practical Vedanta.Swami Vivekananda founded the Ramakrishna Mission on 1 May 1897, in which monks and common people would jointly undertake propagation of Practical Vedanta, and various forms of social service, such as running hospitals, schools, colleges, hostels, rural development centres etc, and conducting massive relief and rehabilitation work for victims of earthquakes, cyclones and other calamities, in different parts of India and other countries.In early 1898, Swami Vivekananda acquired a big plot of land on the western bank of the Ganga at a place called Belur where he established a new, universal pattern of monastic life which adapts ancient monastic ideals to the conditions of modern life, which gives equal importance to personal illumination and social service, and which is open to all men without any distinction of religion, race or caste.Swami Vivekananda’s contribution to India’s renaissance including its emergence as an independent nation is profound.But his contribution to World culture and philosophy can be summed up as follows

Swami Vivekananda gave Indians proper understanding of their country’s great spiritual heritage and thus gave them pride in their past and strengthened the sense of unity as a nation.Netaji Subhash Chandra Bose wrote: “Swamiji harmonized the East and the West, religion and science, past and present.And that is why he is great.Our countrymen have gained unprecedented self-respect, self-reliance and self-assertion from his teachings.”At the end of the 19th century, India in general, and Hinduism in particular, faced grave challenges from Western materialistic life, the ideas of Western free society, and the proselytizing activities.Vivekananda met these challenges by integrating the best elements of Western culture in Hindu culture.During his later part of life Swamiji spent on inspiring and guiding people, both monastic and lay.His health deteriorated and the end came quietly on the night of 4 July 1902.Before his Mahasamadhi, he had written to a Western follower: “It may be that I shall find it good to get outside my body, to cast it off like a worn out garment.But I shall not cease to work.I shall inspire men everywhere until the whole world shall know that it is one with God.” The world still needs his guidance in its pursuit of establishing a Global village of peace and prosperity.(PIB Features)Dr.H.R.Keshavamurthy is the Director (M&C) in PIB Kolkatta