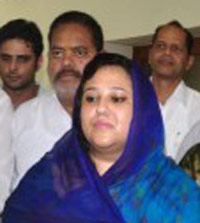 Odisha Channel Bureau Phulbani, Sep 25: Pratyusha Rajeswari Singh, widow of the late Hemendra Chandra Singh, filed nomination papers for the forthcoming by-poll in Kandhamal Parliamentary seat in Odisha as the Biju Janata Dal today.Singh went to the office of the District Collector and Returning Officer in a procession to file her papers for the October 15 poll.Several Ministers and senior BJD leaders accompanied Singh when she went to file her nomination papers along with her family members.Hundreds of party workers and supporters took part in the procession holding party flags, banners and posters depicting Singh.Chief Minister and BJD president Naveen Patnaik had announced Singh’s name as the BJD nominee at Naveen Nivas in Bhubaneswar on Tuesday.Congress has announced to field former legislator Abhimanyu Behera as its candidate for the by-poll in Kandhamal, while BJP has decided to field former BJD MP Rudra Madhab Ray as its candidate.Both Behera and Ray are scheduled to file their nomination papers on Friday.The by-election was necessitated following the death of Hemendra Chandra Singh, who had won from Kandhamal earlier this year.He died on September 5.