Campaigning hots up in Kandhamal 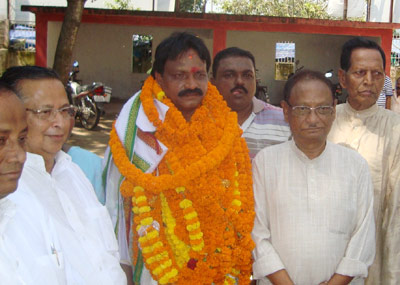 Odisha Channel Bureau Phulbani, Oct 8: Electioneering for the October 15 by-election in Odisha’s Kandhamal Lok Sabha seat gained momentum on Wednesday with the three major parties – Biju Janata Dal, Congress and Bharatiya Janata Party – organising public meetings and road shows in different parts of the constituency.While Chief Minister and BJD president Naveen Patnaik started a three-day campaigning in Kandhamal by addressing an impressive rally at Phiringia seeking votes for his party nominee Pratyusha Rajeswari Singh, the Congress campaigners led by Pradesh Congress Committee president Jayadev Jena and other senior leaders addressed impressive public meetings at Phulbani and Raikia.Congress also organised a road show at Baliguda seeking support of the voters of the constituency in favour of their party nominee Abhimanyu Behera.The BJP leaders led by Bijoy Mohapatra and other senior leaders, including State president K.V.Singh Deo, addressed a series of meetings seeking votes for their candidate Rudra Madhab Ray by highlighting the achievements of the Narendra Modi Government at the Centre.The BJP campaign was likely to gain further momentum on Thursday when Union Minister Dharmendra Pradhan will address election rallies at Jagannath Prasad, Daspalla and Puruna Katak.All the three major parties have mobilised all their resources and manpower in their attempt to win the by-election which was necessitated by the untimely death of Pratyusha’s husband late Hemendra Chandra Singh. While BJD is striving hard to retain the seat by establishing that the allegations of corruption against the BJD had not affected their electoral prospects, both Congress and BJP are trying to be at least in the second position if they fail to get voters’ support to win the poll.BJP, which had finished third with Congress being in the second place in this year’s general elections, is making desperate attempts to stay ahead of Congress and emerge as the main challenger to the ruling party in the future elections in Odisha.