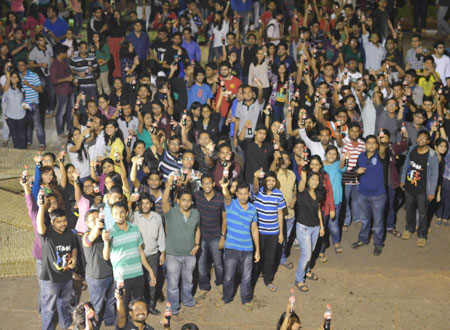 Odisha Channel Bureau Bhubaneswar, Nov 7: Xavier Institute of Management, Bhubaneswar (XIMB) launched its annual management-cultural fest Xpressions here on Thursday evening.The launch of the event was carried out at the XIMB auditorium in the presence of students, members of the media and administration.The launch function introduced the crowd to the upcoming three days of Xpressions and further pumped up the energies of the attendees to match the magnanimity of the event.The introductory speech was given by Manikant Nayak of Tata Steel.Tata Steel is the title sponsor of Xpressions and has long been associated with XIMB in many ways.Nayak spoke of this association and wished Xpressions to be a grand success.This was followed by the traditional lighting of the lamp by esteemed guests and a speech by the Coordinator of Student Affairs, Fr.V.Arockia Das SJ.His speech gave the crowd an insight into how Xpressions started 16 years ago and has been growing stupendously ever since.The previous years have seen the likes of Arijit Singh, Mohit Chauhan, KK and many more grace XIMB and this year XIMB is all set to host Coke Studio featuring Amit Trivedi on the final day of Xpressions’14.He also proudly announced about the new initiatives that Xpressions has taken by introducing events for the socially responsible like X-Athon (marathon), X-Pallavan (sapling distribution) and Prayaag (a platform for the differently-abled).Coordinator S.Peppin also threw light on why Xpressions is such an integral part of XIMB.“It’s a great opportunity for XIMB to make its presence felt across the nation.The zeal, enthusiasm and passion to work in unison towards a common goal are what the spirit of Xpressions stands for,” he said.His speech was followed by a traditional performance of Odissi dance by dancer, Manisha Manaswini.She mesmerized the audience with her graceful depiction Of Lord Krishna’s beauty on the composition of Madhurashtakam.Her dance was followed by the presentation of the launch video of Xpressions.The video introduced the theme of Xpressions’14 – Metamorphosis.Xpressions’14 is set to celebrate the transformation towards excellence by adding of a new and hidden dimension.It seeks to encourage individuals to bring their hidden and innate quality to the fore.The video also justified the enormity of this fest by giving a sneak-peak into all the 34 events that are going to take place over the next three days, including business simulation games, case study competitions and cultural activities.With this, the director, Father Paul declared Xpressions’14 to be open.The opening ceremony also included some other activities like a mix-cultured dance by the students of XIMB, X-Burst and X-Relay.X-Burst celebrated the start of the fest by the bursting crackers and X-Relay was a friendly relay race conducted among all the game committees who are responsible for conducting the flagship events of Xpressions.The ceremony concluded with the distribution of Coca Cola bottles to ‘Spread Joy’ and to mark the association of XIMB with Coke Studio.