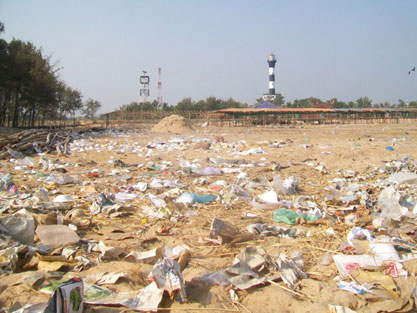 Odisha Channel Bureau Paradip, Nov 16: The golden beach in the heart of the port town in Odisha stands wears ravaged look, thanks to the annual Baliyatra fair.Though the fair concluded on 13 November, heaps of bio-degradable wastes generated from the fair have taken the sheen off the virgin beach.There is nothing wrong in it organizing the fair to hark back the rich maritime history of Paradip, absence of cleaning up the beach defies logic.The beach has turned ugly and awful with stench emanating from the garbage-filled beach, local residents observed. For the tourists, it has become a nightmarish experience to stroll around the beach.Sheen has gone off the virgin beach after a weeklong of hectic man-made interference.The annual Kalinga Baliyatra fair was organized here with much fanfare.On November 13 curtain was drawn on the yearly event.But organizers have seemingly forgotten to clean it up a week after the fair ended. The serene beach is littered with heaps of filth, garbage and mounds of polythene.The civic authorities have blissfully forgotten to undertake the clean-up drive to restore its former self.“Nobody is bothered about tourist importance of the golden beach.It would dissuade the visitors to pay visit to Paradip.Those living on beach tourism are being hit hard,” remarked Dipti Prakash Patnaik, a local resident.“I was shocked to find waste-filled beach.I have visited many tourist places with sea beach.But I have never encountered such a nauseating experience.People are slowly stopping visiting the beach anymore,” said Ramakanta Mahapatra, a tourist.“In several beaches across the country, prohibition is enforced on use of polythene and disposable plastic cups, sachets and bags.Such moves are for keeping the beauty of beaches intact and making it tourists-friendly.But it a matter of deep regret that officials here have scant regard towards such environment safety measures.That’s why the beach in the heart of the port town still wears nasty and dirty look,” observed green activist Sankhanad Behera.The Paradip municipality has undertaken a drive to clear the garbage and waste.It would take two days more to fully clean the beach.Two tons of biodegradable waste materials have already been collected from the beach area, said Paradip Municipality executive officer, Purna Chandra Mishra.