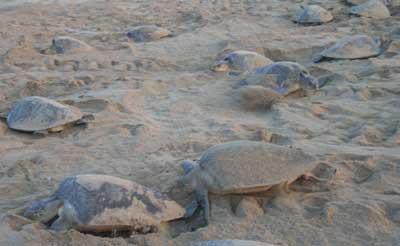 Odisha Channel Bureau Kendrapara, Mar 13: Contrary to apprehension that the marine animals may skip sojourn, Olive Ridley turtles have finally arrived at Odisha’s Gahirmatha beach to lay eggs much to the delight of wildlife lovers and forest officials.An estimated 69,722 female turtles were spotted digging pits on the sandy nesting ground for laying eggs as per their behavioral instinct since past 48 hours.Nearly four lakh turtles had converged at the nesting ground here on 2013 year, according to Chief Wildlife Warden and Principal Chief Conservator of Forest (PCCF) S.S.Srivastav.Gahirmatha beach off Bay of Bengal coast is incidentally acclaimed as World’s largest-known nesting ground of these animals.Forest officials said that the number of visiting turtles would go up in coming days.With the climatic condition is conducive and beach topography being ideal, the turnout of these marine creatures would rise up manifold in coming days, said forest officials.Wildlife experts were earlier apprehensive that the marine species might skip their annual visit this year.Forest officials are relieved a lot as turtles finally turned at the nesting ground though their number is on a lesser scale.The en-masse laying of eggs by visiting turtles has become intense right from day one.The marine animals emerged out of sea water to crawl on the beach on Wednesday night.The turtles’ sojourn in unmanned island with idyllic environs was a virtual treat to watch, said forest officials.As the territory where turtles have congregated to lay eggs is very close to the prohibited defence project, there are none to witness this unique natural phenomenon.Under DRDO directions, visitors and outsiders are stopped from making their way to the place.Only forest personnel on turtle protection duty have access to the nesting ground, said forest officials.The one km stretch nesting ground has got crowded with nesting Olive Ridley marine turtles aquatic who continue to enjoy threatened status equal to that of royal Bengal tigers in the country.On the other hand, mass nesting of Olive Ridleys too has started at Rushikulya rookery coast in Ganjam district of the State.Over 60,000 Olive Rildeys are reported to have reached the Rushikulya coast to lay eggs during the past two days.Female turtles have made their way to the beach to lay eggs in large numbers both at Gahirmatha and Rushikulya.The mass nesting of these species is expected to go on for more than a week.