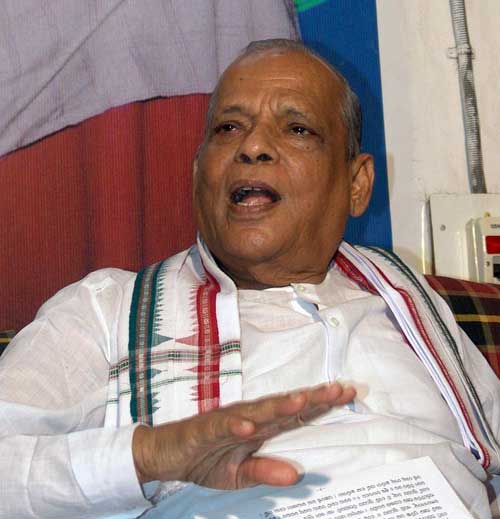 Odisha Channel Bureau Bhubaneswar, April 21: The body of former Assam Governor and veteran Congress leader Janaki Ballabh Patnaik, who passed away early today, was brought to Bhubaneswar from Tirupati this afternoon.Hundreds of his followers and Congress workers chanted the slogan `Janaki Patnaik, Amar Rahe’ as the body of the late leader was brought outside the Biju Patnaik International Airport here. Two senior Ministers of Odisha Government and several senior leaders of the Congress and other parties were present at the airport where the late leader was given the guard of honour by the State police.Several dignitaries and leaders paid floral tributes to the late leader.Odisha Pradesh Congress Committee president Prasad Harichandan and the late leader’s son Pruthvi Ballabh Patnaik were also present at the airport and came in the vehicle carrying the body.The body was brought in a procession to the residence of the three-time former Chief Minister’s residence in Forest Park locality of the city where hundreds of politicians and prominent people from different walks of life gathered to pay their last respects to the departed leader.One could spot leaders from almost parties reaching the place to pay their last respects.According to family sources, the body of J.B.Patnaik will be kept in their Forest Park residence tonight.It would be taken in a procession tomorrow (Wednesday) to the Congress Bhavan in the city and then to the State Assembly.From the Assembly, the body of the late leader would be taken to his ancestral village Rameshwar in Khurda district, and from there it would be taken for cremation at Swargadwar cremation Ground in Puri on Wednesday afternoon.