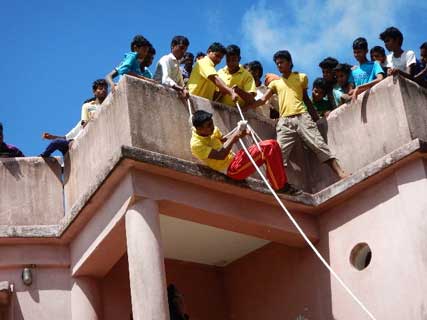 Odisha Channel Bureau Kendrapara, June 25: As blaring shriek of a siren jolted the people to wake up, Tsunami warning through public announcement system reminded them of impending danger to life and property.It was 6 am.A sense of urgency and hurry swept through the sleepy seaside Pitapata hamlet in Odisha’s Kendrapara district.It took hardly 10 to 15 minutes for panic-stricken residents to converse at the multi-purpose cyclone shelter in the heart of the village.Though reality dawned on them soon that it was a mock drill exercise to meet with the exigencies, residents including women and children made it a point to observe the drill from close quarters.“We were thrilled to come across the alertness on part of people.People in these coastal pockets have developed the mindset to successfully counter natural calamities.It was perfect display of disaster preparedness involving local communities who are vulnerable to cyclone and Tsunami strikes”, said Tehsildar Mahakalpada Nila Madhab Bhoi. The administration had planned to organize disaster preparedness mock drill with the assistance of Orissa Disaster Rapid Action Force (ODRAF) and local voluntary organizations.We had decided not to inform the local residents of the holding of the event in advance.The objective was to test the degree of people’s preparedness.The village was selected for the drill as it’s extremely susceptible to Tsunami and cyclone.It’s heartening to note that people rose to the occasion by rushing to the cyclone shelter following the announcement of Tsunami warning, the official observed.The event like mock drill is inculcating among people the spirit to face the fury of natural calamity with tenacity.Volunteers herded people to cyclone warning shelters.People had a practical experience of ‘dos and don’ts’ during time of exigencies, commented local Sarpanch Subhadra Behera. “We are always scared of cyclone, Tsunami and flood.So it is a better proposition to move to safer place.Why should we wait for the government to act? The mock drill was also a learning experience for us to tide over crisis”, remarked a local Artatrana Choudhury.The 1999 cyclone disaster has taught us the lesson not to ignore weather warning.Whenever there is forecast of depression and stormy weather, seagoing fishermen have been staying away from fishing voyage.People here have made it a moot point to relocate to doubly storey pucca building and shelter houses, narrated another local Pabitra Mallik. Having paid the price for ignoring the 99-cyclone warning, people from vulnerable pockets have grown strikingly vigilant since then.Alertness and preparedness to face calamity have evolved from the grass root level, felt officials.