Odisha Channel Bureau Bhubaneswar, July 20: A memorandum of understanding (MOU) was signed today between the Ministry of Railways and Government of Odisha for implementation of Daspalla-Balangir segment of Khurda Road–Balangir New Broad Gauge Railway Line on cost sharing basis. 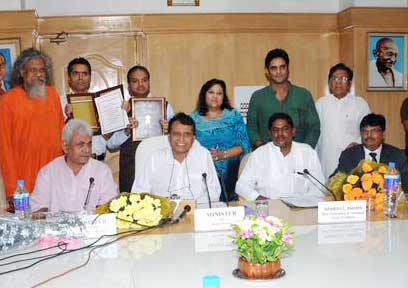 The agreement was signed in New Delhi in the presence of Minister of Railways Suresh Prabhakar Prabhu, Minister of State for Railways Manoj Sinha, Speaker of Odisha Legislative Assembly Niranjan Pujari, Odisha Minister of Commerce & Transport Ramesh Chandra Majhi and other dignitaries.Signatories to the MoU were Ved Parkash Dudeja, Executive Director (Works) Ministry of Railways and Sanjay Rastogi, Commissioner-cum-Secretary, Commerce & Transport Department, Government of Odisha.According to an official release issued by the Ministry of Railways, Khurda Road-Balangir (289 km) new railway line project has been taken up by Railways at an anticipated cost of Rs.3,050 crore.To complete this important infrastructure project, Government of Odisha has consented to partner with Railways by providing land free of cost and sharing 50% of the construction cost for Daspalla to Balangir (177 km) part of this project. The present MoU has been signed for this cost sharing arrangement.Speaking on the occasion, Prabhu said that signing of this MoU will go a long way in developing infrastructure in Odisha, as Khurda-Balangir new line running from East to West across the state will accelerate the development in the districts falling on this line.The State of Odisha, being a mineral rich state, has a special place in today’s economic scenario of our country and Railway is aware of its responsibility to cater to the needs of transportation of people and goods, he said.Assuring that Railways will complete the projects expeditiously, Prabhu called upon Railway Board officials to implement all Railway projects using the management practice of PERT (project evaluation and review technique) so that proper timelines and proper task assignments can be ensured in implementing the projects.