Question of muzzling NGOs does not arise: Centre 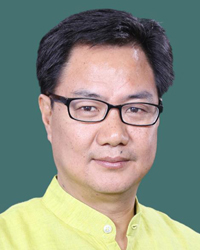 Odisha Channel Bureau Bhubaneswar, July 22: Actions against NGOs are taken only after giving them adequate opportunity and following due process of law.Hence, the question of muzzling NGOs/Civil Societies by Government does not arise, said Union Minister of State for Home Affairs Kiren Rijiju in written replies to two separate questions in the Lok Sabha today.Rijiju said that the Government receives inputs from various security agencies, including Intelligence Bureau , from time to time, about the violations of FCRA, however, action is initiated against the alleged violators only after due scrutiny and following due process as prescribed in the said Act.Expeditious action is taken as and when adverse inputs of violations of provisions of the Act are received against any association.The NGOs/Civil Societies registered/given prior permission under Foreign Contribution (Regulation) Act, 2010 are required to follow the provisions of Act, Rules and instructions issued in this regard from time to time.If any NGOs/Civil Societies violate any of the provisions of the Act and Rules, then only, action is initiated as per provisions of Foreign Contribution (Regulation) Act, 2010.Penal actions have been taken against defaulting NGOs/Civil Societies for proven violations of the Act and Rules.Actions include compounding of offence, putting in prior reference category, suspensions of registration, freezing of accounts, cancellation of registration, prosecution etc.The Government also intends to amend certain provision of FCRR to simplify the procedure for application and grant of registration and prior permission, making the process online and user-friendly, enhancing transparency and accountability, Rijiju said.The changes are also expected to help in effective monitoring and expeditious reporting by banks of receipt of foreign contribution by persons/associations not registered under the FCRA, he added.The acceptance and utilisation of foreign contribution is regulated under Foreign Contribution (Regulation) Act, 2010 (FCRA) and Foreign Contribution (Regulation) Rules, 2011 (FCRR) framed thereunder.They provide for procedure to grant registration and prior permission for receipt of foreign contribution and its utilisation, maintenance of accounts, inspection of accounts of the associations, etc.They also prescribe various offences and penalties that may be imposed, including suspension and cancellation of registration in case of violation of the provisions of FCRA and FCRR.The Minister said that the Ministry of Home Affairs is mandated to administer the Foreign Contribution (Regulation) Act, 2010, for regulating the receipt and utilization of foreign contribution by the associations/NGOs.Instances of non-Governmental Organisations violating provisions of the FCRA and FCRR have come to Government’s notice.FCRA and FCRR came into force with effect from 01.05.2011.Since then, notices were issued to around 21,000 associations in 2011 and to 10,343 associations in 2014 for not filing annual returns continuously for three years.Consequently, registration of 4,138 associations was cancelled in July 2012 and of 10,117 in March 2015 after issue of show cause notices to such associations and giving them adequate opportunity.After inspections and scrutiny of accounts, 15 cases were referred to CBI and 10 to State Police for further investigation and prosecution.Accounts of 23 associations have been frozen.20 associations have been prohibited from receiving foreign contribution.In 2014, penalty amounting to Rs.5,20,82,031 has been imposed on 341 associations for late/ non-submission of mandatory annual returns and of Rs.51,99,526 on 24 associations for receipt and utilisation of foreign contribution without obtaining registration or prior permission under the FCRA.