Odisha Channel Bureau Bhubaneswar, Aug 14: A memorandum of understanding (MoU) was signed between Odisha Government’s Handloom, Textiles and Handicrafts Department and the Asian Heritage Foundation here today for economic upliftment of the marginalised tribal artisan families.Speaking on the occasion, Chief Minister Naveen Patnaik expressed happiness that the Department and the Delhi-based Foundation to initiate a project in the name of ‘Creating Inclusive Business Model for Marginalized Tribal Communities’. 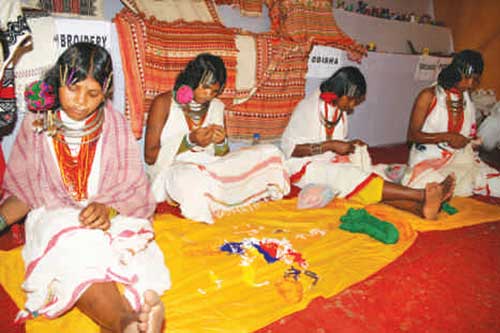 The project will be implemented in the districts of Mayurbhanj and Koraput for a three-year period from 2015 to 2018.It will cover 1600 vulnerable tribal artisan families, of which 70 percent will be women, and seek to improve their skill, earning capacity and number of days of employment.The project will involve Primary Weavers Cooperative Societies, Primary Handicraft Cooperative Societies and various Self Help Groups in the process.It will set up clusters, conduct Skill Development Workshops, and train youth entrepreneurs to operate mobile kiosks.The State Handloom, Textiles and Handicrafts Department will provide all necessary support for the success of the project.Patnaik congratulated and thanked the concerned authorities for their commitment to explore alternative and improved means of economic upliftment of the marginalised tribal artisan families.Secretary Handloom, Handicraft & Textile Chitra Arumugam and Chief of Asian Heritage Foundation Rajiv Sethi signed the MoU in the presence of the Chief Minister and several top officers of the State government.