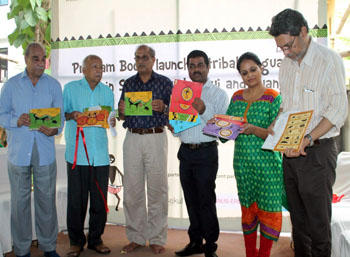 Odisha Channel Bureau Bhubaneswar, June 28: Pratham Books launched the first set of ten books in four tribal languages and four story cards for the reading pleasure of children at Bakul Foundation, Bhubaneswar.Tribal children face many challenges when they enrol in schools, the least among them is to learn in a language that is different from their mother tongue.The State of Odisha has recognized this, and has taken the lead in imparting education in the mother tongue, in the early grades.The educational journey of lakhs of tribal children will be easier and more rooted in their own reality and culture.Drawing inspiration from this, three organizations, Pratham Books, Ignus-ERG with the support of Bernard van Leer Foundation, held workshops with authors speaking Saura, Munda, Kui and Juanga languages.This has led to a unique partnership to publish books for children in these tribal languages, according to a press release issued on Friday.The books are in bilingual format.Using Odia script, they have charming stories for beginner readers drawn from the rich oral tradition of these languages and the illustrations use tribal art with contemporary twist.The event started with the launch of the books by Padmashri D.P.Pattnayak (eminent linguist and educationist who was the Director Central Institute of Indian Languages, Mysore) and panellists Dharitri Patnaik, Ananta Mohapatra, Dash Benhur, Diganta Mohanty and Subir Shukla had a discussion on “Democratizing the joy of reading for all children: A case for books in tribal languages”.There were storytelling sessions by tribal language storytellers for children simultaneously.The children loved the stories and for many it was a very nostalgic moment to hear stories from their own culture.Himanshu Giri, COO, Pratham Books said, “This is a very important step for us as it marks the beginning of a journey where a publisher not only publishes in Indian languages but also in languages which don’t have a script.We are seeing a new set of readers and showing the way to other publishers to reach a nascent market but which will see exponential growth.” Manisha Chaudhry, Head of Content Development, Pratham Books said, “This project marks a new chapter in the tenth year of Pratham Books as it is a significant first step in reaching the last child.It also links marginalized cultures with the world of formal education and could well be the beginning of creating a canon of literature for children from the ground up.” Pratham Books is a not-for-profit organization that publishes affordable children’s books in multiple Indian languages.Till date, Pratham Books has published over 260 titles in 12 Indian languages including English.That’s over 1600 books, most of which are priced below Rs.40.