Need for MTB-MLE in Odisha stressed

Odisha Channel Bureau Bhubaneswar, Mar 19: The need for mother-tongue-based multilingual education (MTB-MLE) was stressed at a State level MLE consultation programme organised by Sikshasandhan in collaboration with Oxfam here on Thursday.A detailed was discussion held on the current status of the policy and challenges were outlined by the experts and those working on the issue. 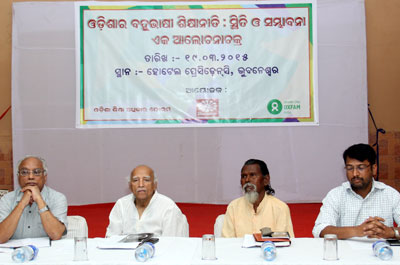 More than 100 participants from different civil society organisations and individuals working on the issue within and outside the State and concerned persons from the government departments took part in the consultation programme.It was commonly agreed that if we want to ensure education for the tribal children, mother tongue based education and multilingual education must be ensured.It was highlighted during the discussion that language is a major hurdle in the path of universal education.Uniforms, mid-day meals and text books can ensure enrollment but cannot keep them in the classroom.The tribal children belonging to a different linguistic community do not understand what the teacher teaches in their class.Odisha Government’s School and Mass Education Department came up with a policy mother tongue based multilingual education on July 1, 2014.Through this the government had decided to continue and extend the MLE programme to all tribal children.It had further decided that the mother tongue of the tribal children will be used as the medium of instruction for the five years of primary education.There are many other positive provisions and proposals in this policy.But the pity lies in the fact that the policy has not been implemented in its true letter and spirit so far.The major objectives of the consultation programme were to discuss different decisions under MLE Policy, disseminating the provisions and coming up with an implementation road map.Odisha is home to 62 tribal groups, including 13 primitive tribal groups.As per the 2011 census 22.8% of the total population comprises of Scheduled Tribes.The status of education amongst the children from these communities is very poor.The statistics shows 62.9% children from the tribal communities leave school before completing grade eight, which is now a right under the right to education act in India.Although there are reasons like poor infrastructure but quality issues like unavailability of mother tongue based teaching plays a significant role at the primary stage.Oxfam India and Sikshasandhan are continuously raising this issue at the project level as well as with the district and state authorities, demanding promotion of mother tongue based multilingual education.