Odisha Channel Bureau BARGARH: Odisha Chief Minister and BJD president Naveen Patnaik announced a series of measures for the benefit of drought-hit farmers at the farmers’ rally organised by BJD at Sohela today.Patnaik also made tall claims about spending more money for development of agriculture in the State.Irrigation facility would be provided to more cultivable land, he said. 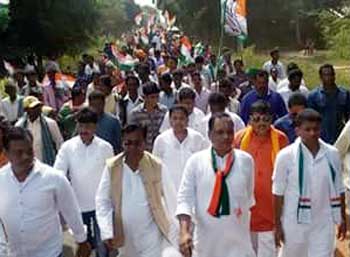 Opposition Congress and BJP, however, criticised Patnaik for shedding crocodile tears for the distressed farmers.Holding Patnaik’s government responsible suicide by more than 100 farmers, the opposition blamed the BJD for keeping three Ministers, whose departments look after the problems of the farmers, away from the rally.Agriculture Minister Pradeep Maharathy, Revenue and Disaster Management Minister Bijayshree Routray, and Cooperation Minister Damodar Rout did not to attend the farmers’ rally.As regards the protests against BJD’s Chasi Samabesh, the BJP staged a demonstration outside the Raj Bhavan and Navnirman Krushak Sangathan staged a demonstration at AG Square demanding immediate measures to provide help to the drought-hit farmers. The rally that Patnaik addressed at Sohela was not a farmers’ rally, but a rally of BJD workers, said Pradip Majhi, former Congress MP.There were more number of BJD workers than farmers among the thousands of people who attended the rally, and several crores of money was spent by the ruling party for to hire vehicles to carry BJD supporters to the rally venue, the opposition said. 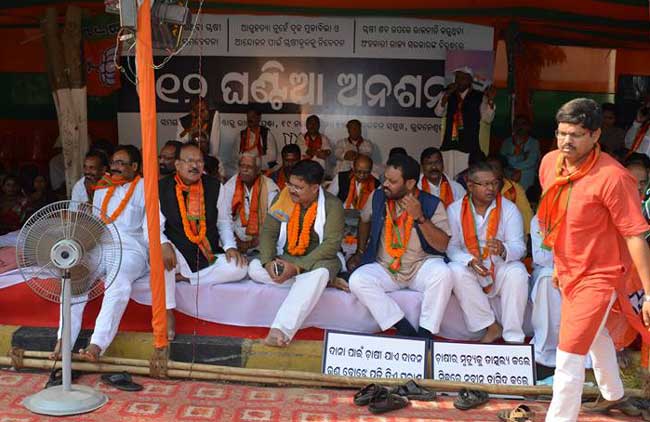 BJP leaders who took part in the 12-hour-long- fast outside Governor’s House criticised the BJD rally paid homage to the farmers who had committed suicide due to crop failure and loan burden.A large number of BJP leaders and workers who took part in the fast protest condemned the BJD for organising a show of strength at a time when innocent farmers were committing suicide.The leader and workers of main opposition Congress also organised rallies and demonstrations at various places in the State in protest against the BJD for organising the rally in western Odisha when no government help had reached the distressed farmers. Naveen Patnaik Government is shedding crocodile tears with a view to retain the support of the farmers and this effort would go in vain since the farm community had realised this government’s false promises, said a Congress worker. Both Congress and BJP also criticised the State government as well as the BJD for the police action against those who were opposed to the ruling party’s rally.Two former Congress MLAs, Sadhu Nepak and Nihar Mahananda, and noted farmer leader Lingaraj were detained by the Bargarh police hours before Patnaik reached Bargarh to attend the rally to avoid any untoward incident.Meanwhile, with both Congress and BJP continuing their agitation against the State government, senior officials said in Bhubaneswar that a series of measures are being taken to provide relief to the distressed farmers in the drought-hit regions.The Congress has been organising a series of padyatras under the leadership of Prasad Harichandan to highlight the plight of the distressed farmers and demanding payment of compensation of Rs.10 lakh each to the family of the farmers who have committed suicide since September this year.