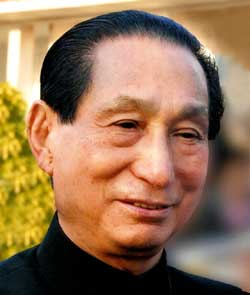 Odisha Channel Bureau Bhubaneswar: `A Naga’s Quest for Fulfilment’, the autobiography of Odisha Governor S.C.Jamir was launched by Chief Minister Naveen Patnaik here on Thursday.Jamir’s book portrays a vivid account of the man and his times, and tells an absorbing narrative of his role in the formation of Nagaland.“This book is a fascinating story of his life and experiences, his thinking about society and politics; his participation in many struggles and his contribution in different capacities and as Chief Minister where he carved out a distinct niche for himself,” Patnaik said while launching Jamir’s book at the Raj Bhavan here. The book reflects the enormous amount of work he has put in for writing up a very interesting and informative account of his life.Even those who knew him well will learn some interesting things about him, Patnaik added.Stating that we need the power of ideas more than ever in today’s world, Patnaik said we need new thinking, a new narrative to tackle the new challenges.“And one will feel the fragrance of idealism coming through the narratives of this autobiography.He has mentioned everything in his book in a very simple and lucid language that makes a pleasurable reading,” said Patnaik, while expressing confidence that the work of Jamir will continue to inspire generations for times to come.Jamir is a well known and respected figure in the contemporary Indian politics.He is known as the architect of modern Nagaland.He has a distinguished careers right from being the Parliamentary Secretary to former Prime Ministers Pandit Jawaharlal Nehru and Lal Bahadur Shastri.The first MP from Nagaland, four times Chief Minister of Nagaland, Union Minister, Governor of Goa, Maharashtra and Gujarat and now as Governor of Odisha, Jamir has distinguished himself as a man of integrity and strong commitment having a long experience in the political landscape of India.