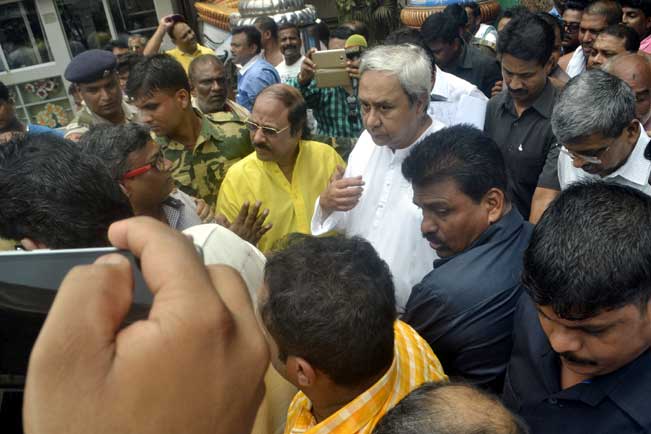 Odisha Channel Bureau PURI: A day after he spoke to Prime Minister Narendra Modi over phone about the safety of Sri Jagannath temple’s Jagamohan, Odisha Chief Minister Naveen Patnaik visited the temple here on Wednesday to take stock of the situation.During his visit, Patnaik went inside the Jagannath temple to see the condition of Jagamohan, the prayer hall of the 12th century shrine, and the repairs required for the safety of the structure.He was accompanied by Chief Secretary Aditya Prasad Padhi and officials of the temple administration.The Prime Minister had on Tuesday assured Patnaik that he will give necessary instructions to the Archaeological Survey of India for taking up the repair of Jagamohan in an urgent manner.The issue had come to the fore after experts opined that Jagamohan required immediate repair for the safety of the temple as well as devotees.Patnaik had also earlier written a letter to Modi and drawn his attention on the condition of Jagamohan.It has been alleged by leaders of opposition parties that the ASI had delayed the repair of Jagamohan which had developed some cracks.Erstwhile King of Puri Dibyasingha Deb had also expressed concern over the distressed condition of Jagamohan and urged both the Centre and the State government for its restoration on war-footing.

A Central team led by Union Secretary Culture is scheduled to visit the temple on May 20 to hold consultations with experts and the State government to facilitate repair of Jagamohan.The team will include Director General, ASI, other senior officers and engineers of IIT-Chennai.A meeting of 11 types of servitors of Lord Jagannath is also being held in Puri during the day to discuss about the repair of Jagamohan.