Odisha gets ready for Raja festival

Odisha Channel Bureau Bhubaneswar: The festive spirit has started to grip Odisha.Preparations have begun for the three-day annual Raja festival as the onset of monsoon was set to bring cheers among the people.As the farmers’ were awaiting the Raja, an agrarian festival, since they can take a break from their agricultural activities, others, primarily city-dwellers had started fetching new dresses from the market. 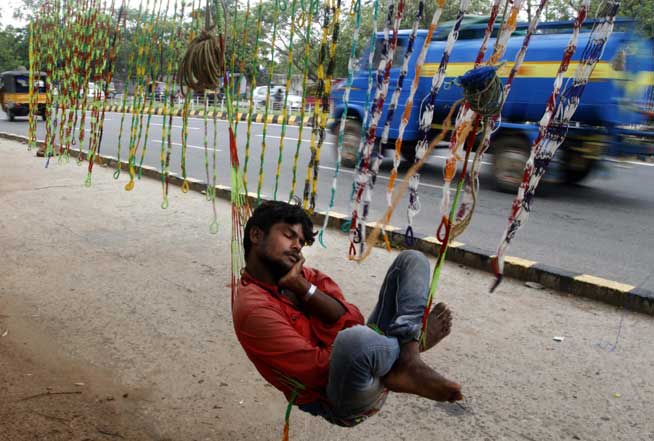 Many have also planned visits to their native villages during the Raja celebration.During the festival, unmarried girls wear new dresses and move around in their respective localities enjoying the freshly prepared traditional delicacies such as Poda Pitha and Manda Pitha, Aarisha Pitha at different homes.The girls also enjoy riding the swings at their homes and outside.Swings made of plastic were already being sold in the markets in Bhubaneswar, Cuttack, Puri, Sambalpur, Rourkela and Berhampur.People were buying the swings to put up at their houses.As regards men celebrating the Raja, they indulge in eating Raja Pana (sweet betel) after having delicacies as Poda Pitha and other dishes.Many hotels have also planned to organise special food festivals to commemorate the Raja festival.On the other hand, Odisha Tourism Development Corporation (OTDC) has organised Raja Mahotsav at the Pantha Nivas hotels situated at Bhubaneswar, Sambalpur, Barkul, Rourkela, Chandipur, Paradip, Konark, Gopalpur, Puri and Cuttack.A part of the Raja celebrations from June 13 to June 16, a food festival has been organised at the Pantha Nivas in Bhubaneswar where authentic Odia delicacies are will be served to the local visitors and tourists.Apart from other outlets of different brands of dresses and malls and departmental stores already doing good business due to the buying spree as part of the Raja preparations, new films are also being released by the Ollywood industry for entertaining the film lovers during the RajaIt is believed that the mother goddess Earth or the divine wife of Lord Vishnu undergoes menstruation during the first three days of the Raja celebrations.The fourth day is called as Vasumati Gadhua or ceremonial bath of Mother Earth, according to mythology.