Odisha Channel Bureau Bhubaneswar: More than 200 tribal people belonging to all the 62 tribes, 119 ITDA Blocks, 46 Modified Areas Development Approach and 21 Clustered Villages of Odisha have vowed to establish Gram Sabha Sarkar in the lines of PESA, 1996 and FRA, 2006 in every village and discard the on-going Panchayati Raj system.The participants discussed on the district specific problems and they collectively identified that by extending the Panchayati Raj system in the Scheduled 5th area, the government had committed a serious crime against the tribals and had ruined the tribal areas. 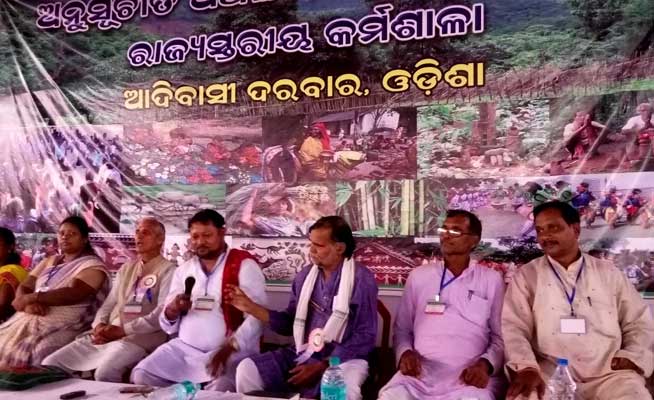 They concluded that that in the Panchayati Raj system, there is no recognition of their villages; they do not have rights to hold Gram Sabha as and when they want, they do not have the rights to fix the agenda of the Gram Sabha meeting, record their resolution, keep the Gram Sabha register etc.The Adivasi Darbar also discussed on role of tribal MPs and MLAs and was of the view that these MPs and MLAs in true sense were not tribal representatives but party representatives who hardly bother for anti-tribal policies of the Odisha Government.The Adivasi Darbar called upon the tribal people across the State to unite and to fight against anti-tribal government policies keeping aside party politics.Besides, the Adivasi Darbar insisted to constitute District Autonomous Council (DAC in the pattern of VI Scheduled of the Constitution as is stated in PESA 4 (O), and to remind the Governor of his constitutional powers in scheduled areas through rallies and dharna.The tribals also suggested for establishment of Scheduled Area Administrative Service Commission in the State, to fight for the inclusion of all non-scheduled Adivasi dominated areas i.e.MADA, Clustered Villages, and Dispersed Tribal Development Programme (DTDP) etc into scheduled area, and to fight for inclusion of all left out tribals in the Scheduled Tribe list.The Adivasi Darbar was addressed by a host of leaders and activists.“We regret that the implementation of the Constitutional provisions meant for tribals and tribal areas have been neglected, we have been consistently deprived, marginalized, excluded from our constitutional safeguards and basic human rights as citizen of the country by the State Government,” said Gorge Tirkey, the tribal MLA from Sundargarh district.He further criticised the Government of Odisha for its anti-tribal policies.“While all the land and resources in the tribal areas belongs to tribals how can the government bring the draconian Odisha Land Grabbing (Prohibition) Bill 2015 and deprive us from our homes and create Land Bank to hand over them to the private companies,” Tirkey queried.Senior Journalist Rabi Das recollected the contribution of the tribals in the freedom struggle and said it is a fact that the constitutional provisions meant for tribals i.e.the provision of Schedule 5thAreas, the PESA Act, 1996, FRA Act, 2006, the Tribal Sub Plan, POA Act 1989 etc.are not being implemented in its true spirit by all the successive governments.Prafulla Samantara, president of Lok Shakti Abhiyan addressing the gathering criticised the Naveen Patnaik Government in the State for violating the constitutional laws of the tribals and for promoting anti tribal policies like Panchayati Raj system, Vana Surakhya Samiti etc and for allowing private companies in tribal areas creating war like situations.Nicolas Barla of Indigenous People’s Forum Odisha (IPFO) said “Odisha Government has failed to implement Central PESA Act for last 20 years.The State is treating us step motherly manner.” He further questioned on the role of Governor who has been the constitutional head of the tribals and scheduled areas.Chief Guest on the occasion, Debendra Champia, former Speaker of Bihar Assembly discussed on the historical background of the Tribal Advisory Council (TAC) which he said inherited its power from the Government India Act, 1935.He gave the Britishers credits for the constitutional provision of Scheduled 5th and Scheduled 6th areas.He also called the Chairmanship of non–tribal in TAC as unconstitutional and called upon the tribal to protest against it.