The classes at the medical college, built at a cost of Rs 192 crore, are scheduled to begin on the occasion of the Teachers’ Day on Tuesday after Patnaik dedicated the hospital to the people of Odisha. 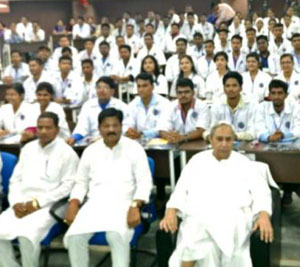 Speaking on the occasion, Patnaik described the new medical college and hospital as another stepping stone towards his government’s resolve to ensure inclusive, equitable and sustainable development in the state.

“My government is working earnestly towards promoting healthcare through strengthening of medical education and tertiary care by bringing it closer to community,” he said.

Of the 100 students who have taken admission in the new medical college as many as 20 students are from nearby districts of Malkangiri, Koraput, Kandhamal, Nabarangpur, Rayagada and Nuapada.

Another new medical college and hospital and the fifth in the government sector – Pandit Raghunath Murmu Medical College and Hospital at Baripada in Mayurbhanj district, is scheduled to be inaugurated by Patnaik on Wednesday.

Besides, the State has three private medical colleges, all in Bhubaneswar.

With the opening of the medical college at Baripada, the number of MBBS seat in Odisha will increase to 850.

Odisha government is expecting to add 200 more MBBS seats to cross the 1000 seats-mark.