Odisha Channel Bureau
Bhubaneswar: Odisha Chief Minister Naveen Patnaik on Thursday praised the efforts of the JD Centre of Art in organising the international film festival for art and artists in Bhubaneswar.

Imaging the art and artists is one of the significant endeavours to preserve, document, evaluate, renew and improve these art forms in order to save them for prosperity as a source of inspiration. The continuous efforts of JDCA in this direction are praiseworthy, Patnaik said. 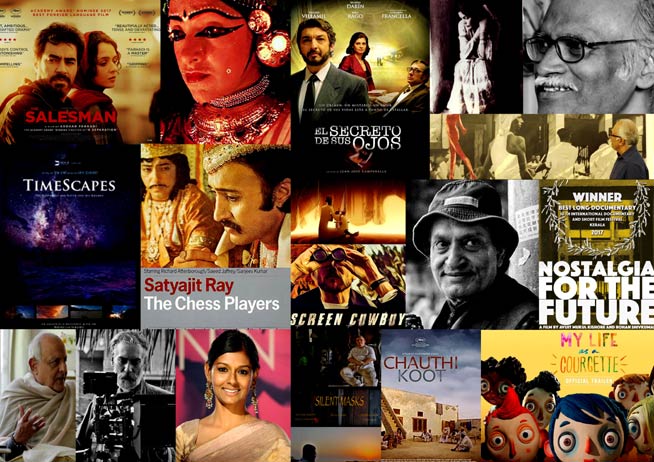 Inaugurating the 12th International Film Festival on Art and Artist here, Patnaik said that Odisha, the captivating region of India, is a treasure house of language, literature, art and architecture.

Through centuries Odisha has retained its cultural identity within the mainstream pan-Indian culture, he said, while adding that with a distinction of painting, architecture, sculpture, handicrafts, music and dance, Odisha is really the land of art and artists.

“With its focus on literature, the 12th Film Festival on Art and Artists organised by Jatin Das Centre of Art is a befetting tribute to our great heritage of art and culture,” Patnaik observed.

Stating that films have been one of the most powerful audio-visual mediums with the twin objective of entertainment and enlightenment, Patnaik said the journey of Odia film started in 1936 with the production of Sita Bibaha, coinciding with the creation of Odisha as a separate State and a synergy between language, literature and filmdom was started with that.

Observing that literature creates an emotional bond with the readers, Patnaik said great pieces of literature have influenced the process of change during different times.

“Fakir Mohan’s timeless creation `Rebati’ continues to be a path breaking piece on women’s education. So are the creations of Kalindi Charan Panigrahi and Gopinath Mohanty and others; that have challenged the social inconsistencies of that time,” he said.

Further stating that Pandit Gopabandhu Das and Utkal Gaurav Madhusudan Das had inspired nationalistic and linguistic spirit through their writings, Patnaik said “now, it’s time, in addition to literature, we must preserve and re-tell the life and times of these great litterateurs”.

“Filmmakers should come forward to work on documentaries or even bo-pics, if possible, on our revered literary souls,” he said.

The festival being held at IDCOL Auditorium will continue till January 14. It has been organised by the JD Centre of Art in association with the Department of Tourism, Government of Odisha.

Among others who were present at the inauguration of the three-day festival include artist Jatin Das, actress Nandita Das and State Tourism Minister Ashok Chandra Panda.