Your love has made me indebted to you, Naveen Patnaik tells people

Patnaik was given a hero’s welcome when he returned to Odisha after receiving the Ideal Chief Minister Award at Pune on Sunday. 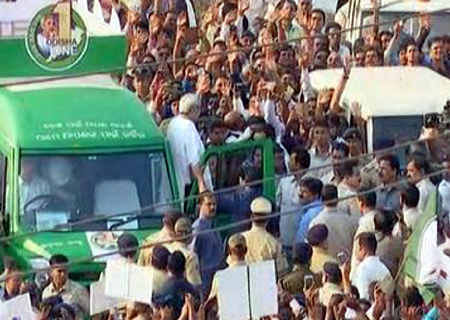 Thousands of workers of the Biju Janata Dal, who had gathered on the route to welcome their party president and Chief Minister, raised slogans “Our CM, Our Hero” as soon as Patnaik came out of the airport.

On the way to his residence, Patnaik addressed the gathering telling the people that the love they had showered on him had made him indebted to them.

He dedicated the Ideal Chief Minister Award to the people of the State and urged the people to come forward to continue working together to make Odisha the No. 1 State of the country.

Patnaik concluded his brief address with two slogans such as “Bande Utkal Janani” and “Jai Jagannath” to a thunderous applause.

Patnaik was conferred with the ‘Ideal Chief Minister Award-2018′ at the 8th Bharatiya Chhatra Sansad (Indian Student Parliament) at Pune.