Odisha Channel Bureau
Bhubaneswar: As the nation celebrated the 69th Republic Day with the ceremonious parade at the Rajpath in New Delhi on Friday, the people of Odisha celebrated the day with gaiety and patriotic fervour to honour the date on which the Constitution of India came into effect in 1950.

The Republic Day was celebrated across Odisha amid tight security with Governor S. C. Jamir unfurling the national flag at the State level celebrations on the Mahatma Gandhi Marg in Bhubaneswar. Thousands of people gathered to watch the colourful parade. 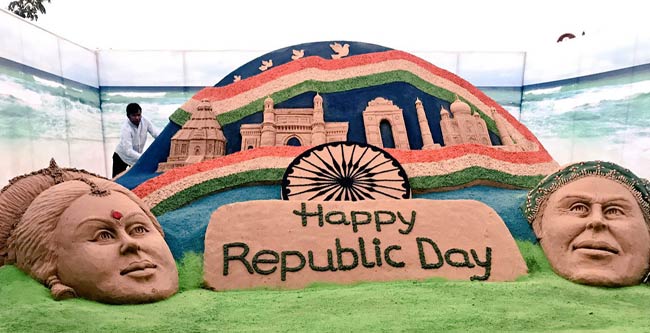 The State has taken giant strides in all spheres, including economy, health, education, industry and infrastructure, said Patnaik.

He said that Odisha has surpassed the national average in poverty reduction and other indicators of human resource development.

“Our government is working with dedication and sincerity to empower farmers, tribals, women and youths,” he added.

The Republic Day celebrations were also organised at all the district headquarters towns across the State. While Ministers unfurled the national flag at many districts, the flag hoisting was done by Revenue Divisional Commissioners and District Collectors at the remaining districts.

The Republic Day celebrations passed off peacefully across Odisha despite of a boycott call given by Maoists some districts in southern part of the State.

The hoisting of the national flag at all government offices, educational institutions and other private and government bodies marked the Republic Day celebrations across Odisha.