Gowda raised the demand while addressing a large gathering on the occasion of the release of the book “The Tall Man Biju Patnaik” here. “Biju Patnaik was truly a tall man both in terms of his physical height and his stature in national politics,” he said.

Gowda advocated that the book on Biju Patnaik be published in all Indian languages. He said that Biju Patnaik played a big role in making him the Chief Minister of Karnataka and later the Prime Minister. 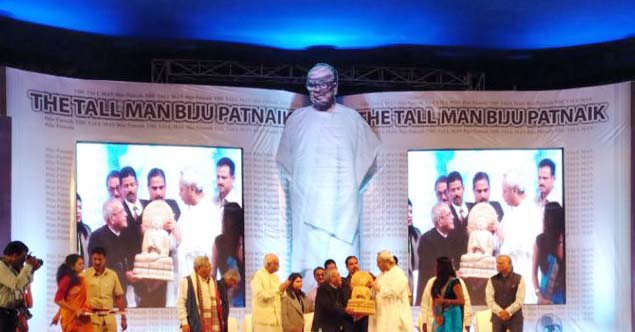 It may be recalled that in December 2015 Odisha Assembly had adopted a resolution seeking Bharat Ratna for Biju Patnaik posthumously. The ruling BJD has also been raising the issue from time to time.

Narrating in detail about Biju Patnaik’s initiatives in the establishment of Paradip port, NALCO and many other industries and institutions, Mukherjee said Biju Patnaik was a legend during his life time, not metaphorically, but in the true sense.

Overwhelmed by the impressive gathering at the Utkal Mandap open air auditorium, Advani said that he had never ever attended such a glorious book release function.

Recalling his association with Biju Patnaik, Yechury said that when the United Front Government was being formed, Biju Babu had told him not to worry and secularism will be protected.

“Today when every democratic institution in the country is under attack, we do miss Biju Babu,” said Yechury.

Chief Minister Naveen Patnaik, who thanked the politicians cutting party lines for attending the book release function, said that Biju Babu is an idea in continuity; an idea of realising the breadth of human aspirations; an idea of Odia self esteem selfless service and empowerment; an idea that was much ahead of his times – that will live forever and continue to inspire generations to come.

The author of the book, Sunder Ganesan said that his research took him to different countries like Indonesia, UK, USA, Russia and Germany as Biju Patnaik was an international figure.

Gita Mehta, eminent writer and daughter of Biju Patnaik and her husband had helped in gathering valuable data and photographs for the book, Ganesan added.

Veteran journalist Prabhu Chawla who reviewed the book said that Biju Patnaik was a true patriot with a global outlook.