Odisha Channel Bureau
Bhubaneswar: Chief Minister and BJD president Naveen Patnaik addressed a virtually rally on Thursday urging the voters of Balasore Assembly seat to cast their votes in favour of his party nominee in the bypoll scheduled to be held on November 3.

In his address, Patnaik told the people through video conferencing that he did not visit Balasore to avoid large public gathering in view of the ongoing COVID-19 pandemic. He would visit Balasore at a later date after the pandemic ends. 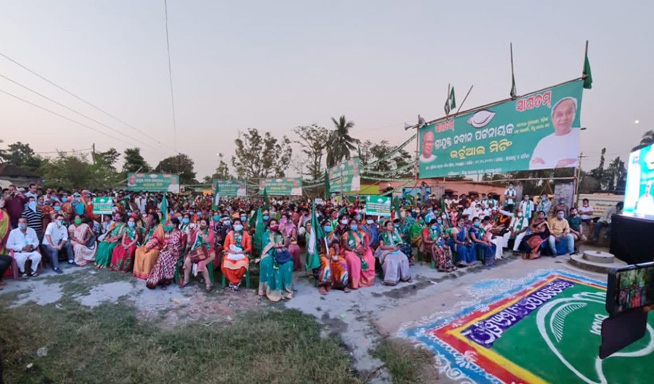 Informing that the State government has been taking various measures to ensure development of Balasore, Patnaik said that efforts were on to provide all basic services to the people in the constituency, including providing land rights to the slum dwellers in Balasore city.

The Chief Minister said that general elections were three years away and a lot of development work could be done in the Balasore constituency by then.

He assured that he would personally pay attention to the development of their area and appealed to the voters of Balasore to vote for his party in the coming bypoll. Swarup Das is the BJD nominee for the Balasore seat.

Patnaik requested the voters to go to the polling booths on November 3 by following the COVID-19 guidelines and vote in favour of the BJD.

The BJD president’s address through Zoom was watched by the people of Balasore at different points in the constituency where big LED screens were put in place. Many people also watched Patnaik’s address through various social media platforms.

Patnaik had held a similar virtual rally to woo the voters of Tirtol Assembly seat on Wednesday. The bye-election in Tirtol too is scheduled to be held on the same day.

The bypolls are being held following the death of Balasore legislator Madan Mohan Dutta of the BJP in June and Tirtol legislator Bishnu Charan Das of the BJD in July this year.