Odisha Channel Bureau
Bhubaneswar: Bhubaneswar-based ISL club Odisha FC on September 1 announced it has signed a three-year international club partnership with Watford FC of England’s Premier League. This association will be mutually beneficial for both the regions where the clubs operate and will cover different footballing and non-footballing aspects.

In a statement, Odisha FC said that this partnership will play an important role in the development of the footballing eco-system in Odisha as coaches from Watford will help Odisha FC set up youth systems, and players from Odisha FC’s Elite Youth team will get an opportunity to train with Watford’s first team and/or academy team. 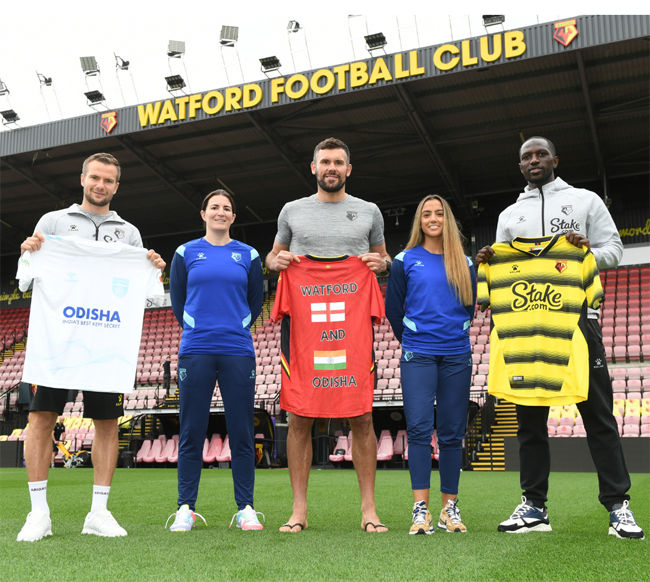 Watford and Odisha FC will support each other in their respective youth systems including scouting and training of young footballers and along with that they will collaborate and promote different grassroots programs as well.

The clubs will also work together for the development of women’s football in the State and across India and friendly matches will be organised between their women’s teams.

In addition to that, Odisha FC will have an opportunity to travel and train at Watford as a part of the pre-season training and will also play friendly matches in England. Both the clubs will cooperate with each other in the selection of players, the appointment of coaching and support staff, improving tactical and technical aspects of the game among others for the respective first teams. OFC and Watford will also share ideas in terms of marketing and social media visibility which will help in popularizing the sport and enhance the fanbase in the region.

Explaining more about the partnership, Odisha FC’s Club President Raj Athwal said: “We are excited and proud to announce a unique partnership with English Premier League club Watford FC. With both clubs looking to grow their brands globally, the partnership provides a unique platform to not only share best practices in all areas of our club but enhance the development of future players.

“We are excited at the prospect of working with Watford FC’s coaches with a view to establishing a residential academy in Odisha, providing a conveyer belt of footballers who will one day proudly adorn the club colours and, as part of their development, have the opportunity to train at Watford’s esteemed academy too.

“For the Odisha supporters, there is the exciting prospect of potentially loaning players from Watford FC and, equally, players from Odisha FC can be scouted to play in the English leagues,” he added.

Watford FC’s Commercial Director Paul O’Brien said of the partnership: “This is something really quite different and we love to get involved in new things that provide really different experiences for the club and our staff.

“Partnering with Odisha FC gives us a chance to get a real insight into football’s global appeal and affords us a great chance to share learnings with a similarly ambitious club.

“Learning more about India and exploring its cultural richness and passion for sport is something we’re all looking forward to doing right away,” he said.