During this visit to the Kalinga Stadium, the Chief Minister inaugurated five sports infrastructure facilities and laid the foundation stone for 89 multipurpose indoor halls. 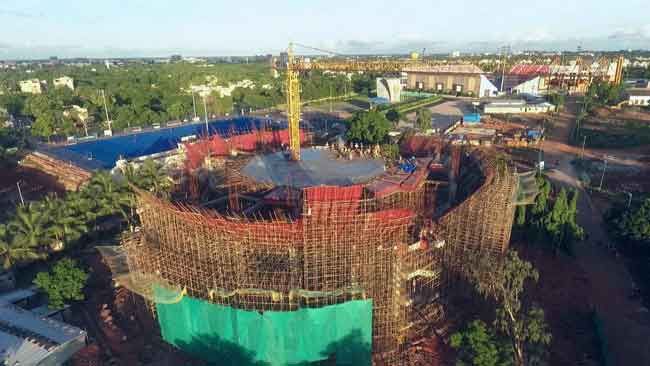 Odisha Channel Bureau
Bhubaneswar: Odisha Chief Minister Naveen Patnaik today visited the Kalinga Stadium here and reviewed the progress of the major sports infrastructure projects ongoing within its premises, particularly the indoor aquatic centre, which once complete, will be an iconic facility for swimmers.

In addition, the Indoor Athletics Stadium will be the first such facility in India. The projects are on track and scheduled to be completed in a year, according to the Chief Minister’s Office.

“These are land mark sports infrastructure which will make Kalinga Stadium as the leading destination in various sports,” said Patnaik while expressing his satisfaction on the progress of ongoing construction.

During this visit to the Kalinga Stadium, the Chief Minister inaugurated five sports infrastructure facilities and laid the foundation stone for 89 multipurpose indoor halls.

The projects inaugurated include the Biju Patnaik Weightlifting Hall and a new sports hostel at the Kalinga stadium, a swimming pool each in Angul and Baripada and the indoor stadium in Rourkela.

These multipurpose indoor stadiums will have facilities for badminton, table tennis, and weightlifting and can be used as disaster shelters and hospitals during disaster and pandemic like situations.

All these projects will give an added boost to the ever-evolving sports ecosystem of the state.

Currently, Odisha has promising young lifters who are poised to become strong medal contenders in near future, and having a Weightlifting Hall lead by team of experts and professionals with access to Sports Science facilities will go a long way to ramp up their performance.

The new Sports hostels and its allied facilities and amenities, within the Kalinga Stadium premises, will ensure a home away from home for the athletes, while they stay focussed on their goal to achieve sporting excellence.

Swimming has ample opportunity for medals and the state is expanding its Swimming ecosystem and is offering Swimming both as a competitive sport and a life skill.

The semi Olympic Swimming Pool in Angul and Baripada, led by professional instructors and life guards, will run grassroots programs and will be of benefit to the local talent and the community at large. In the very near future there will be few more launched in other regions.

Rourkela, which is transforming into the second hub of Sports in the state, with India’s largest Hockey Stadium coming up for the Hockey World Cup in 2023, is adding many sports infrastructure to its length and breadth. The inaugurated Indoor Stadium is an added milestone for the smart city and will be a hub for shuttlers of that region.