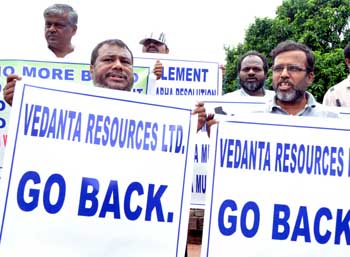 Odisha Channel Bureau Bhubaneswar, July 31: A day after public hearing was conducted by the Odisha State Pollution Control Board and the Kalahandi district administration for expansion of Vedanta’s existing alumina refinery at Lanjigarh, activists from different political and social organisations staged a protest in Bhubaneswar on Thursday terming the public hearing “unconstitutional”.The public hearing at Lanjigarh for expansion of the refinery from one million tonne per annum capacity to six million tonne per annum capacity is “unconstitutional” when Gram Sabha resolutions had gone against the company, the protestors said.They demanded that Odisha Government should cancel all MoUs with Vedanta Aluminium Limited and the company should leave the State.“We feel that a nexus has already been built up between Vedanta Resources Ltd and both Central and State Government to implement the plan of the company,” they alleged in a statement.Social activist Prafulla Samantara had congratulated the tribal people at Lanjigarh for opposing the public hearing at Lanjigarh on Wednesday.“The public hearing is illegal as the Environmental Impact Assessment Report prepared by the company is not complete and it has ignored negative impact on the biodiversity of Niyamgiri,” Samantara had said in a statement.