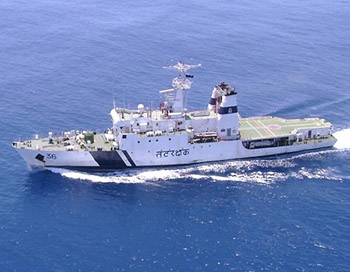 Odisha Channel Bureau Paradip, August 5: At least nine seagoing fishermen who were stranded mid-sea for over 24 hours were rescued on Monday by Coast Guard personnel near Dharma, about 14 nautical miles off Paradip coast.The distressed fishermen from Chudamani area of Baleswar district were caught in rough sea as Coast Guard ship Rajkiran spotted their vessel – Om Sai Ram – drifting on the seawaters without direction.As the seawater was unsteady and wavering, the fishing vessel had failed to negotiate the rough sea condition.The windy weather had also made the things worse for the vessel’s crews.The vessel carrying the fishermen was caught in turbulent sea waves.It was destined to capsize had it not been spotted on time.After having received the SOS from the distressed crew members from disaster alert transmitters (DATs), Coast Guard ship Rajkiran undertook the rescue mission at about 10 am on Monday.It had taken about five hours to reach the spot and retrieve the distressed vessel because of exceedingly adverse mid-sea weather condition, said Coast Guard officials on Tuesday.After the rescue act, the vessel and its crew members are being towed back safely to Paradip.A vessel owned by Odisha marine fisheries department is towing the boat to safety.The Coast Guard ship after completing the rescue mission has headed towards Sagar Island in West Bengal where there are reports of two fishing vessels stranded mid-sea, added Coast Guard officials.“It is very unfortunate that fishermen are risking their lives by venturing into sea despite the fact they have been warned not to undertake fishing voyage because of unsteady sea condition,” said District Fisheries Officer Gyan Ranjan Samal.