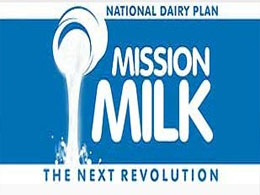 Odisha Channel Bureau Bhubaneswar, Aug 6: The National Dairy Development Board (NDDB) is planning to strengthen dairy farming in Odisha.NDDB’s efforts have always been geared towards involving more and more women in collective business and governance, according to an official release issued here on Wednesday.Apart from strengthening existing dairy cooperatives, formation of women dairy cooperatives and increased participation by women in existing cooperatives would be emphasised.Keeping this in view, NDDB is organising a national symposium on `Women Empowerment Through Dairying’ at Xavier Institute of Management, Bhubaneswar on August 7 and 8.The symposium would focus on building a sequential road map to nurture gender inclusive dairy cooperative institutions.Ranked 14th in the country, Odisha’s estimated milk production stood at 1.86 million tonnes in 2013-14, which is 1.4 per cent of national milk production.The cooperative dairies together procured 3.9 lakh kg per day in 2013-14, which is 1.1 per cent of country’s cooperative milk procurement.This represents 13 per cent of the estimated surplus (as against 18 per cent for the country as a whole).Presently, 20 per cent of inhabited villages are covered by cooperatives as against national coverage of 23 per cent.Therefore, there is considerable scope to increase coverage and provide greater market access to small milk producers of Odisha.In 2011-12, the per capita availability of milk in Odisha was 112 gms/day about one-third of the availability at all India level of 290 gms/day.In terms of milk production, the State has registered a growth of 6.2 per cent per annum during last decade ending 2012-13, higher than the national growth of 4.6 per cent.Liquid milk marketing by Odisha’s cooperative unions was 4.3 lakh kg per day in 2013-14, which is 1.6 per cent of the national cooperative liquid milk marketing.The processing capacity of cooperatives in the state was 5.45 lakh litres per day.The dominant category of dairy animal in Odisha is indigenous cows (mostly non-descript) – accounting for 74 per cent of total in-milk animals, followed by crossbred cows (17 per cent) and buffaloes (9 per cent).