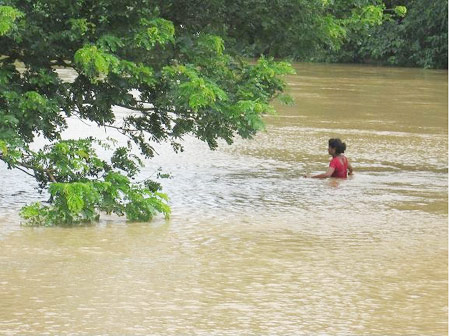 Odisha Channel Bureau Paradip, Aug 7: With flood panic reigning supreme, people have resorted to panic buying of essential commodities in Kendrapara and Jagatsinghpur districts.Both the river-locked districts of Odisha have so far partially borne the brunt of watery onslaught while adjoining Jajpur is the worst-ravaged by flood.Procuring commodities ahead of anticipated flood has become a common sight in both urban and rural areas which are yet to come under submergence.Scene was invariably the same in large areas with shop owners having hectic schedule to meet with the sudden demand.About 225 villages of 98 gram panchayats located in lowland spots have come under the grip of deluge so far, while 2.47 lakh of people are affected by flood in both the district, according to official reports.Relief and rescue operation are in full swing.NDRF, ODRAF besides coast guard personnel are on the alert to counter with eventualities.Though villages have been affected, the intensity of flood is on a much lesser scale in comparison to devastating flood of 2011.The officials are on the round-the-clock vigil to meet with the exigencies, said officials.There were reports of people going on buying spree of essential commodities.The administration has asked the people not to be unduly panicked, said officials.Call it preparedness or panic state of mind, people both in rural and urban areas have taken to buy essential articles, mostly potato, flattened rice, flour and rice.A section of unscrupulous traders are to be blamed for artificial scarcity of essential food items.Raids have been conducted in various marketplaces.There is adequate stock of food items, officials said.“Through public address system people had been asked not to become panicky.Prices that had gone up following buying spree have been brought down.A kg of potato is now being sold at Rs 18/20 a kg in most places of Jagatsinghpur district,” said Jagatsinghpur Collector Satya Kumar Mallick.