Odisha Channel Bureau Puri, Aug 23: Even before the joy of being released from custody after 14 long years had sunk in, Iron Lady of Manipur Irom Sharmila Chanu is back behind the iron grills again.Sharmila was set free by a Manipur court on Wednesday, which had decriminalised her protest against the Armed Forces special powers act or AFSPA, due to lack of substantial evidence.Soon after TV footage beamed live visuals of the 42-year-old frail Manipuri woman being forcibly lifted and carried away by posse of women cops, the sense of hope that had sprung in the last 48 hours evaporated quickly. 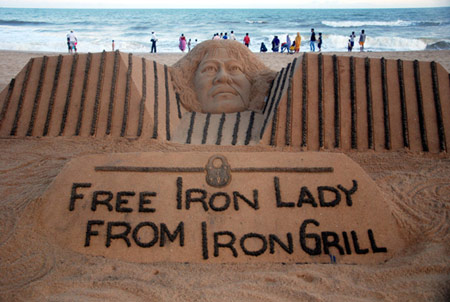 Renowned sand artist Sudarsan Pattnaik created a sand sculpture of Irom Sharmila with a message “Free the Iron Lady from the Iron grill” at Puri beach of Odisha on Saturday. “I appeal through my art for the release of Irom Sharmila,” said Pattnaik.He created a 5ft high sand sculpture by showing the face of Sharmila with Iron grills and Pattnaik has used about 4 tonnes of sand in it.So far Padma awardee Pattnaik has participated in more than 50 international sand sculpture championships and festivals around the world and won many prizes for the country.He always tries to give a social message through his sand sculptures.